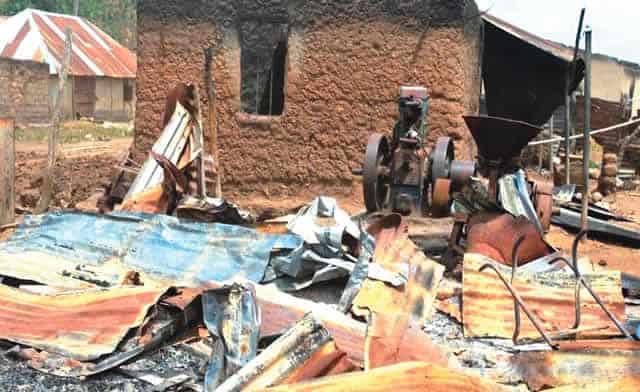 Community Crisis In Kogi Leads To lose Of Lives

The clash between the people of Egbura and Bassa in Kpenche, Kogi State has spread its arms to communities in Toto Local Government Area of Nasarawa State, leading to destruction of homes and properties.

The alleged attack on the people of Bassa by the Egbura, reportedly led to the displacement of some occupants of the communities.

Abraham Gbaje, the President, National Association of Bassa Students, Nasarawa State Chapter, revealed that the crisis started on April 22 when the people of Kpenche, a Bassa town was attacked by the Egbura militants.

“On that day, the Egbura militia men attacked Kpanche and the palace of its paramount ruler, Mr. Jonathan Chabani, at 5am.

“The aim was to shock the Bassa people beginning with Kpanche settlement. In the attack, the palace of the paramount ruler was totally destroyed, killing about four of his family members. The paramount ruler himself escaped narrowly. No fewer than seven persons reportedly lost their lives in the invasion,” Gbaje narrated.

The president further revealed that lives of some of the attackers were lost during the community attack.

“When the Egburas of Toto LGA realised that some of their commanders also lost their lives, they began preparations to attack Bassa. They started by killing two Bassa lads, who were children of one Rev. Moses Gunu in Umaisha,” the student leader stated.

He accused security operatives of protecting the Egbura, alleging that some mercenaries had been contracted to exterminate the Bassa nation.

The crisis was confirmed by Idrissu Kennedy, the Nasarawa police spokesman, but said that operatives had been deployed to maintain law and order in the affected communities.