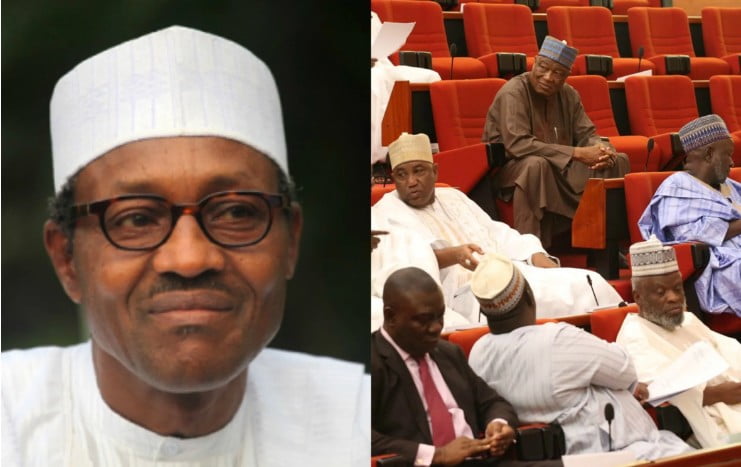 A Legal luminary and elder statesman, Prof. Ben Nwabueze (SAN) has written to the leadership of the National Assembly, informing them that they do not have the legal power to summon President Muhammadu Buhari for violating the Constitution.

According to Nwabueze, in the letter dated April 27, although the president’s action was unpardonable for not getting the approval of the lawmakers before paying for the Tucano aircraft, he is not among those that could be summoned by the National Assembly as provided in Section 89(1)(c) of the Constitution.

In the letter to the National Assembly, Nwabueze, an expert in constitutional law, said: “I commend you for the courage of the role you play in checkmating the incipient dictatorship of President Buhari.

“It is, to me, simply unpardonable that he should pay out of the Consolidated Revenue Fund of the Federation the sum of U.S. four hundred and ninety six million dollars ($496,000,000) for the purchase of military aircraft without the authorisation of the National Assembly as specifically required by Section 80 of the Constitution ‘in the expectation’, as he puts it in his letter, ‘that the National Assembly would have no objection’.”

According to him, the word “summon” is defined in the dictionary as a “command or order by authority to appear”.

‎While admitting the Section 89(1)(c) of the Constitution empowers the Senate or the House of Representatives to “summon any person in Nigeria” he added that the president was not covered within the meaning of the term “any person” under the section because he is also the “Head of State” so proclaimed by Section 130(2) of the Constitution.

He also  quoted from one of his books where he wrote: “As the repository of the title and ceremonies of the sovereignty associated with government, the state has invested in it the symbolic authority and majesty that go with them.

“He embodies the majesty and authority of the state and, as some say, he incarnates the state, i.e. he is the state – a rather extravagant assertion.

“The position of head of state has been aptly described by Oppenheim as follows: ‘As a State is an abstraction from the fact that a multitude of individuals live in a country under a sovereign government, every State must have a Head as its highest organ which represents it within and without its borders, in the totality of its relations… The Head of a State as its chief organ and representative in the totality of its international relations, acts for his State in its international intercourse, with the consequence that all his legally relevant international acts are considered to be acts of his State.’

“The separateness of the state from the government has tended in practice to be blurred by the union of the two offices of head of state and head of government in the same person in most countries, and, in countries where they are not so united, by the virtual reduction of the head of state to a figurehead, implying that only the government, but not the state, has an effective, significant existence. This should not be so.

“A head of state is a position that implies more than a figurehead. It is a position that ought conceptually and logically to be, and function as, a moderating agency, as a ‘balance sheet’ to the constitution intervening when the political authorities or forces seem to be out of alignment with one another.”

To this end, Nwabueze argued that the head of state is expected to take all such actions as may be required for dealing with a grave and immediate danger threatening the integrity of the state or its institutions and authority.

He added: “Besides, Section 89 of the Constitution specifically provides that the power of the National Assembly to ‘summon any person in Nigeria’ is ‘subject to all just exceptions’. The exemption of the Head of State from the power is surely one of the ‘just exceptions’.

“Whilst President Buhari by his actions and utterances, may have brought humiliation and degradation to himself as president, he remains our Head of State, and should be treated as such, and accorded all the pomp and dignity appertaining to the office.