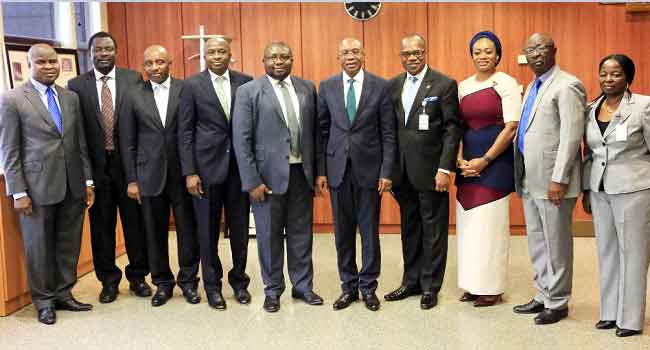 Governor of the Central Bank of Nigeria, Godwin Emefiele has assigned duties to the newly appointed Deputy Governors who assumed duty on March 28.

According to Okoroafor, the affected principal officers have since assumed duty in their new duties.

The statement added that Emefiele has emerged The GuardianEconomic Personality of the Year (2017) in recognition of his contributions to stabilising the Nigerian financial sector during the recession as well as the Bank’s effort in development financing.

Presenting the award to Emefiele at a ceremony held at the Eko Hotels and Suites, Victoria Island, Lagos, the President and Chairman of Council, Chartered Institute of Bankers of Nigeria (CIBN), Prof. Segun Ajibola, commended him and his team at the CBN for their efforts at managing the Nigerian financial sector and intervening in critical sectors of the economy, particularly agriculture.

In his acceptance speech, Emefiele expressed appreciation to The Guardian for selecting him for the award and commended the outfit for its foresight and thoughtfulness at publishing the report on “Financing the Economy”.

The CBN governor noted that the exposure of the Nigerian economy to global shocks was a reflection of the fact that Nigeria as a country was unable to sufficiently produce what its people consume, hence the huge dependence on foreign goods.

He attributed the inability of the country to sufficiently produce what it consumes to heavy dependence on the oil sector to provide the foreign exchange needed to finance the country’s imports, poor diversification of the economy, and low factor productivity in key non-oil sector.

He also identified the ostentatious and elitist taste for imported goods in Nigeria and inadequate funding to strategic high impact and high employment multiplier sectors as major challenges facing the economy.

While noting that the level of credit in the domestic economy channelled to the productive private sector was critically below the levels required to place the Nigerian economy on the path of balanced, sustainable, and inclusive growth, Emefiele however assured that the CBN and the banks would continue to be catalysts to development in Nigeria, particularly as it concerns the vulnerable and needy in the society.

According to him, following a joint initiative by the banks in 2016, each bank contributed five per cent of its profit after tax to support the development initiatives of the government.

He added that the contributions to the fund were nearing the N60 billion mark, adding that the CBN and the deposit money banks had concluded plans to unfold the disbursement criteria for the fund to the vulnerable sectors in Nigeria, which he said needed access to credit.

On the efforts by the central bank at countering the adverse effects of the global shocks, he said the CBN embarked on a number of short-term and long-term policies such as a cycle of monetary tightening to rein in inflation, and external reserves management through the restriction of foreign exchange for imports of goods that can be produced in Nigeria.

He said the CBN also established a decisive withdrawal of the “de facto” subsidy for the importation of 41 non-essential commodities with unfolding successes, introduced various policies to eliminate foreign exchange speculators, bettors, round-trippers and rent-seekers, and thereby stabilize the exchange rate with the establishment of the Investors-Exporters Window, among others.