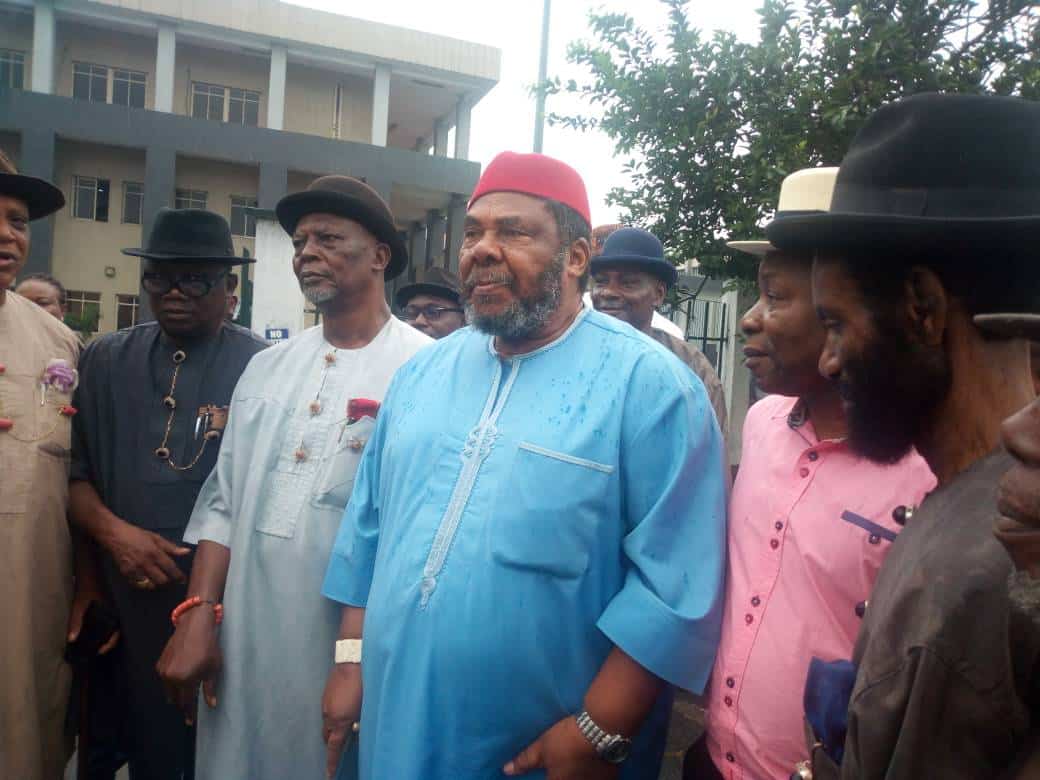 Veteran Nollywood actor, Pete Edochie is one of the artors that has made names for themselves in the movie industry, the actor was seen to have led a group of protesters to the High Court in Port Harcourt over a suit by ex-militant leader, King Ateke Tom.

Edochie led other Nollywood stars on the streets of Port Harcourt to show their oneness with Ateke whose image they claim was being destroyed by politicians.

The veteran actor in an interview with newsmen made it known that their reason for been in the High Court is, “to appeal to the Court to expedite action on the suit filed by High Chief Ateke Tom and give his verdict to serve a deterrent to others who try to defame the personality of other people.”

The team of actors were not the solicitors alone, as other group of protesters were seen from Okirika including chiefs, elders and youths who also stormed the court premises in solidarity.

Chief Dere Oforome who led the other group of protesters said they were in court to register their grieviances over what they described as wickness against the Okirika Kingdom.

Meanwhile, hearing on the one billion naira defamation law suit by ex-militant leader and the Amayanabo of Okochiri in Okirika, King Ateke Tom against eight chieftains of All Progressive Congress has been stalled at a High Court Sitting in Port Harcourt.

Ateke’s suit is in reaction to his photograph which was used in a recent Pro-SARS solidarity match organized by the APC in the state.

When the matter was called, Justice Constance Green ordered a substituted service on eight members of the APC in Rivers State over the defamation suit.

The suit PHC/345/2018 before the court has defendants as: Hon. Asita O. Asita, Deputy Governorship candidate of the APC in the 2015 election, Dr. Davies Ikanya, the Chairman of APC in the state, Dumo Lulu Briggs, Sampson Ngerigbara. Others include, Prince Tonye Princewill, Sekonte Davies, Emeka Beke, secretary of the APC in the state and Lawrence Chuku.

The matter was adjourned to May 9 for mention.