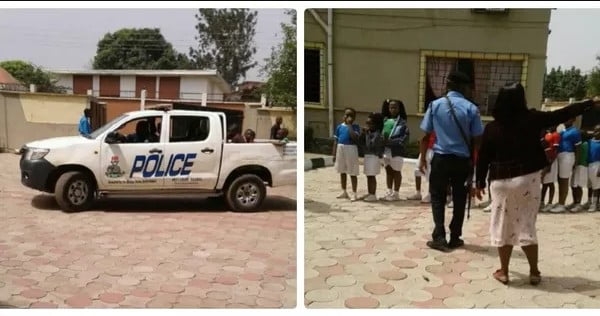 A Facebook user, Nkem Beluchi said the school, Early Dew Montessori Primary School located in GRA Enugu, arrested some of their pupils who are between 4 to 7 years old. The police in the state were called and the pupils were put behind a hilux vehicle provided by the police.

It was also alleged that the hilux which was used in arrested the pupils was used to convey dead bodies, few hours before the children were put there. All of these, for not doing their assignments! She posted the photos above with the caption:

“Enugu State Government Police in conjuction with Early Dew Montessori “primary” School GRA Enugu, arresting 4 to 7 year olds and putting the behind a hilux -thesame place they put dead bodies, and where they could have jumped out from fearfully- for not doing their assignments.”