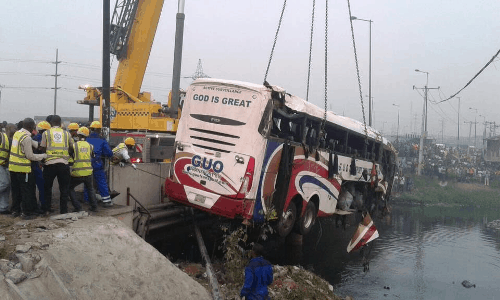 No less that Three people ;pst their lives with, 23 other injured on Friday morning, February 17th, when a luxurious bus plunged into canal at Owode Elede, Ikorodu Road
A statement issued by the Lagos State Emergency Management Agency says the Luxurious bus with registration number Anambra GDD 386 YE belonging to GUO Transport Service Co. LTD was gathered to be enroute Maza Maza from Aba, Abia State.

According to preliminary investigations conducted at the incident scene.The luxurious bus was said to have skidded off its track while on top speed and plunged into the Canal at Owode Elede, before Mile 12. Ikorodu Road.

The bus with 59 passengers on board had 23 people injured and were treated on the spot by a joint team of LASEMA Paramedics and LASAMBUS, 9 out of the treated victims were taken to the Lagos State Trauma Centre at the Toll Gate for further treatment, while 2 adult male and 1 female which include the motor boy were recovered dead from the Canal. The 3 dead bodies, accidented bus and their belongings were handed over to the men of the Nigeria Police, Owode Division.

The Agency recovered the accidented vehicle with the aid of its heavy duty equipment Crain from the Canal and towed it off the road to ensure free flow of traffic.The response and recovery operations was coordinated by LASEMA in conjunction with LASTMA, LASAMBUS, Lagos State Fire Service, RRS, Task Force, Nigeria Security and Civil Defence Corps, FRSC, NEMA amongst others.

The General Manager Mr. Adesina Tiamiyu affirmed that a proper investigation would be conducted on the incident. He however advised motorist to be safety conscious and avoid excessive speeding while driving especially when embarking on night journey. 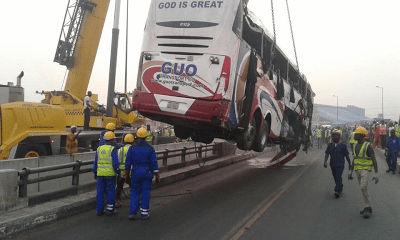 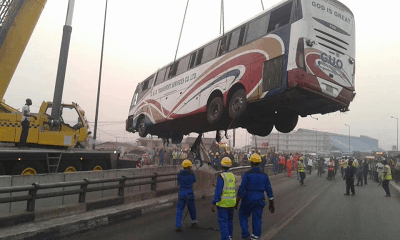 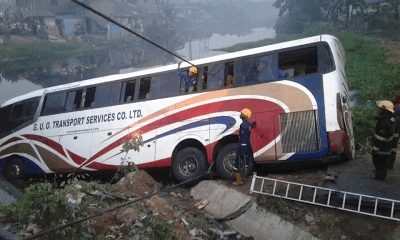