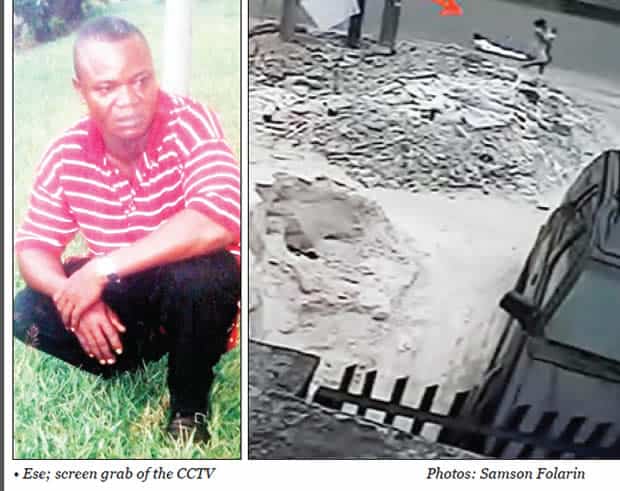 A painter, Mr. Ese Akpan, was recently killed by police stray bullet in Port-Harcourt.
Akpan had told his family on Tuesday that he was going out to get the money owed him by a construction company unfortunately he was he was killed by a stray bullet from a police team escorting a bullion van to a bank.

According to a Closed-Circuit Television camera, which captured the scene, Ese was shot at exactly 1.45pm on Old Aba Road, Rumuomasi, Port-Harcourt, Rivers State.

PUNCH, which obtained footage of the incident, observed that Camera 4 captured Ese as he walked along the road while the police van came behind.

The second side, captured by Camera 1, showed a woman with a baby standing at the bus stop as Ese approached.

There was a sudden gunshot which hit the 60-year-old, while the frightened woman fled the sight.

About two minutes afterwards, some sympathisers, including workers of First Rivers Hospital Limited, a private facility in front of which the incident occurred, rushed to help the victim.

An official at the hospital, who did not want to be identified, said a few minutes after the victim was taken to the hospital, a man came in to check on him.

He said, “The man said the escort team was coming from an eatery at Rumukoro where the operatives had gone to pick some money. He said they were heading towards a bank in the area and he was driving behind the van when they fired the shot. He said they usually did that when they approached where they were taking money to. Unfortunately, the man was hit by the bullet. He told us to save his life.”

A senior official at the hospital, who spoke for the management, said efforts by the hospital to save Ese were abortive.

“Our doctors, nurses and matrons were all involved in the battle to save his life. He lost a lot of blood. The bullet destroyed his internal organs. We took him to the theatre, and our workers even donated three pints of blood to save him, but he died. He was able to give us his name and address before passing on,” she added.

She noted that the hospital reported the matter to a police station in the area.

The widow of the victim, Mrs. Christiana Akpan, said when she attempted to report the case at the Area Command, Moscow Road, she was chased out of the command.

She added that when she went to the governor’s office, she was not given any audience.

Christiana told PUNCH that her husband had left the house with a plan to demand payment of a debt owed him by a construction company.

She said, “He worked as a painter and had executed a project for a construction company last year. He used the money that we saved for our house rent to complete the project. The firm paid him part, but still owed him about N266,900.

“Since that time, he had been going to ask for the balance without any result. Our landlady recently served us a notice to quit and he became desperate to recover the money.

“On Tuesday, January 31, around 1pm, we both left the house and when we got to Mile 1, we parted ways. I went to see a friend, while he went to the company. It was not up to one hour that I was called that my husband had been shot.

“I went to report at the area command, but immediately I said policemen shot my husband, I was chased out. I went to the governor’s office and I was sent away like a thief.”

PUNCH learnt that the deceased, who was survived by four children, had been taken by the family to a mortuary in his hometown in the Essien Udium Local Government Area of Akwa Ibom State.

The family’s first child, Kingsley, demanded that the government bring the culprits to book and pay the damages.

“Before my dad died, he told me that he was shot by the police. The police are silent about the case and have refused to do anything. We want the government to bury him and pay damages,” he added.

Another member of the family, Blessing, asked the authorities not to sweep the case under the carpet.

The state Police Public Relations Officer, DSP Omoni Nnamdi, said he was not aware of the incident, promising to get back to PUNCH.

He had, however, yet to do so as of the time of filing this report.