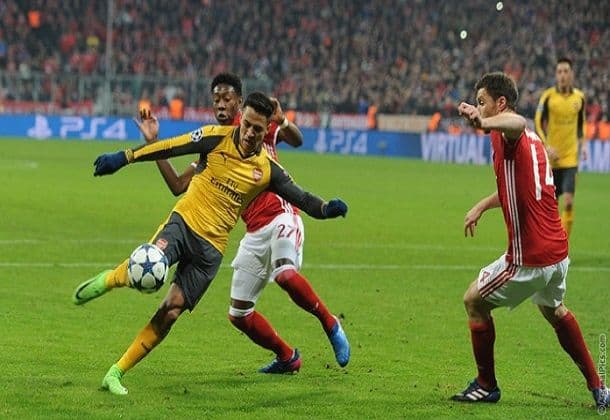 Bayern Munich continued their dominance over Arsenal with another convincing 5-1 thrashing of the North Londoners in Wednesday’s UEFA Champions League round of 16 first leg clash staged at the Allianz Arena.

Arjen Roben opened scoring after 11 minutes with a curling effort but Alexis Sanchez brought the Gunners back on level terms off a penalty rebound.

Three second half goals in ten minutes from Thiago Alcantara and Robert Lewandowski with the former grabbing a brace before Thomas Muller came of the bench to complete the rout with a late finish to force a repeat of last season’s group stage score line at the Allianz Arena.

Arsène Wenger made two changes to the Arsenal side for Wednesday’s crunch clash with Bayern Munich, the most noteable was the return of Granit Xhaka.

The Swiss international had missed the last four domestic games through suspension, but was drafted in to add some muscle and guile to the midfield, where he partnered Francis Coquelin.

The other notable change saw Alex Oxlade-Chamberlain shifted out of the central midfield role in which has thrived of late to start on the right flank, with Theo Walcott dropping to the bench.

David Ospina continued in his role as our Champions League goalkeeper after impressing during the group stage, with Petr Cech on the bench in Bavaria.

Bayern, meanwhile, were without Franck Ribery and Jerome Boateng, but fielded a star-studded team containing the likes of Robert Lewandowski, Douglas Costa and Thiago Alcantara.

It was no surprise that Arsenal were forced on to the back foot early on as the host have averaged more than 60 per cent possession in every game they’ve played this season. It was just the sort of start the Gunners had hoped to avoid.

Bayern were starting to purr and with 11 minutes on the clock, Arsenal’s task grew even greater as Robben cut in from the right to curl a trademark strike into the top corner. It could have got even worse soon afterwards but for a well-timed tackle from Laurent Koscielny to deny Lewandowski.

Bayern were dominating possession, leaving Arsenal to chase the ball for long periods and try to spring attacks on the counter. Arsenal sprang into life for one such attack in the 26th minute as Alexis broke forward, only to be shoved over by Mats Hummels right on the edge of the area.

Mesut Ozil took the resulting free kick, which Manuel Neuer spilled in the area but no one was on hand to poke home the loose ball.

Moments later Arsenal were back on level terms after Koscielny was tripped in the area after a quickly-taken corner. Alexis stepped up to take the penalty, only to see Neuer save it – but the Chilean reacted quickest to fire in the rebound.

It was just the boost the visitors needed after a trying opening 25 minutes. Bayern responded as you would expect them to, and the next chance was theirs as Arturo Vidal hooked Thiago’s ball back at the far post and Lewandowski headed over from close range.

Arsenal had visibly grown in confidence after the equaliser and back they came, with Oxlade-Chamberlain finding space in the area to pick out Xhaka, but his powerful drive was straight at Neuer.

Lewandowski would head another effort over the bar before the break, while Ozil forced Neuer into action for the final noteworthy chance of a fascinating opening 45 minutes.

The optimism Arsenal had accrued from their encouraging pre-break efforts were dashed in a 15-minute period early in the second half, that began with Koscielny – their best defender limping from the field and ended with Thiago putting the tie beyond them.

Four minutes after Gabriel had replaced the Frenchman at the back, Bayern reclaimed the lead as Lewandowski rose high above compatriot Shkodran Mustafi to meet Philipp Lahm’s excellent cross and head home his 31st goal in 34 games for club and country this season.

The Pole then turned provider for Thiago, backheeling the ball into his path for a simple finish before the Spaniard quickly added his second courtesy of a shot that deflected in off Xhaka’s boot.

Only some lax finishing, the woodwork (from a deflected Lewandowski shot) and a superb David Ospina save to tip over Javi Martinez’s header from a corner prevented further goals before late substitute Muller scored with essentially his first contribution, collecting from Thiago before sidefooting home.

Ospina’s save from Martinez was one of his 22 touches of the ball during the game – no Arsenal player managed more.

Muller’s late goal surely represented the final nail in the Gunners’ coffin and leaves Wenger now facing an uncomfortable, undesirable truth – that his side’s season boils down to an FA Cup game on a plastic pitch in Sutton.