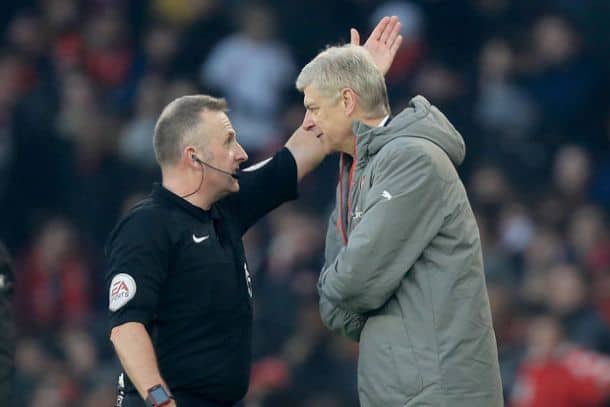 Arsenal manager, Arsene Wenger, says he will accept a misconduct charge by the Football Association for his behaviour during the 2-1 Premier League win over Burnley.

He was charged with verbally abusing and pushing fourth official Anthony Taylor after being sent off in the closing snewses of the game.

Wenger, who later apologised, had been dismissed for reacting angrily to a 93rd-minute penalty given to Burnley, who trailed 1-0.

After being sent to the stands by referee Jon Moss, Wenger moved away from the pitch but stood at the tunnel entrance and refused to move as he tried to watch the remaining few minutes of Sunday’s match.

As Taylor encouraged him to move away, Wenger was seen to push back against him.

When asked if he would accept the charge, Wenger said: “Yes. I am big enough to stand up for what I do.

“When I don’t behave like I think I should behave, I am big enough to say I am not right. I’m a passionate guy and I believe that I am completely committed in my job and want to win football games.”

The Frenchman will appear in person on Friday and is likely to learn his fate on the same day.

The Gunners will face Southampton in the FA Cup on Saturday.