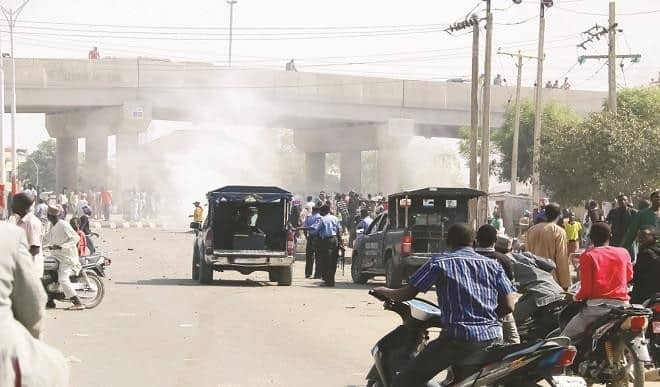 No less than 25 people got injured and 20 cars badly damaged in Kano yesterday following a clash between officials of the Kano State Road Transport Agency (KAROTA) and commercial drivers.

The incident occurred at Ado Bayero Bridge in the state metropolis when a combined team of mobile policemen and KAROTA officials stormed the place to disperse some youths allegedly operating illegal motor park under the bridge.

Daily Trust learnt that the agency recently did a special

Our reporter gathered that shortly after the officials of KAROTA struck, the youths went on rampage placing bonfires along the busy Zaria road and other roads leading to the bridge.

Chairman of the motor park, Najeeb Wurno, said several private cars were damaged. Wurno said they were conducting their business when suddenly some officials of the agency and armed mobile policemen stormed the place and started beating people and vandalizing cars.

Aliyu Bello Doguwa, a commercial driver whose car was damaged during the clash, said, “We were about to arrange some passengers when the KAROTA arrived and soon after, they started beating people including passengers. I have counted about 20 cars that were badly damaged and several drivers were injured,” he said.

One Inusa said he counted 10 cars that were damaged and 11 people that were injured. “It is unfortunate that in a state like Kano, government officials will descend on innocent people, injure them and destroy their properties for no just course,” he said.

Majiia said although there was no casualty, several cars, including KAROTA’s patrol vans, were vandalized during the clash. He said however that the police had restored law and order in the area.

He said the agency also organized a sensitization campaign at all illegal motor parks where the operators were informed on government plans to banish all illegal motor parks.
Read more at http://www.dailytrust.com.ng/news/general/kano-25-injured-20-cars-damaged-as-karota-drivers-clash/181512.html#zB8Mz96GwRilJ0Dv.99