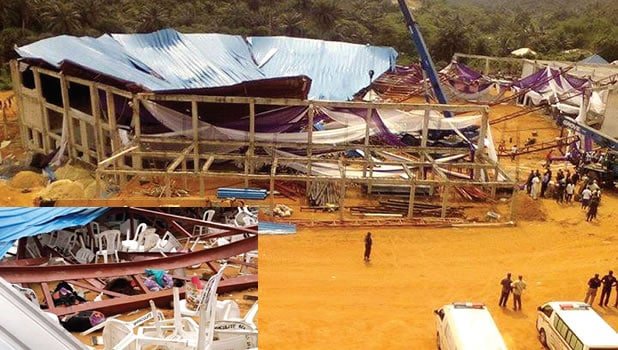 The Church building collapsed on December 10, 2016 during the ordination of its founder Apostle Akan Weeks leading to the death of some worshippers while several others sustained injuries.

Akpan, who testified before the Commission of Inquiry set up by the state government to investigate the cause of the collapse in Uyo on Friday, said the church building had been marked for demolition five different times.
Akpan said, “We marked ‘X’ on the structure on March 6, 2013, it was covered by paint; we did the same on July 16, 2014; March 1, 2016; July 20, 2016, and August 16, 2016.

“The developer ignored all the markings by covering them with paint.

“We later issued 21-day ultimatum to remove the property failing which the authority will remove the structure and cost born by the developer.

“We needed cranes, excavators, bulldozers, money, security coverage and vehicles to carry out the demolition.

“On May 4, 2015, we requested funds and security coverage for the demolition; the money was approved by His Excellency but we never accessed the money.

“The then Accountant-General did not release the money for us to embark on the demolition.”

He said that UCCDA needed the security coverage, as its employees were molested when they came to the site earlier to demolish the structure.

He added that the owners of the Church threatened to liaise with the government to dismiss any of the authority employees who made attempt to embarrass workers on the church site.

Akpan said that the site of the church was on the hilly side of Uyo ravine which is prone to landslide.

He added that the entire area where the church was built had since 2002 been mapped out by the government as conservation area.

According to him, all the churches and event centres built along that axis of the road were illegal, as the soil could not hold any structure.

“UCCDA gave the developer of Reigners’ Bible Church 21 days to demolish the building, but after 21 days, government did not facilitate the demolition.

“Since the government did not provide the funds to facilitate the demolition, if negligence is found anywhere, then government will not go scot-free,” Ekpo added.

The commission adjourned sitting to reconvene on January 9 for further hearing.