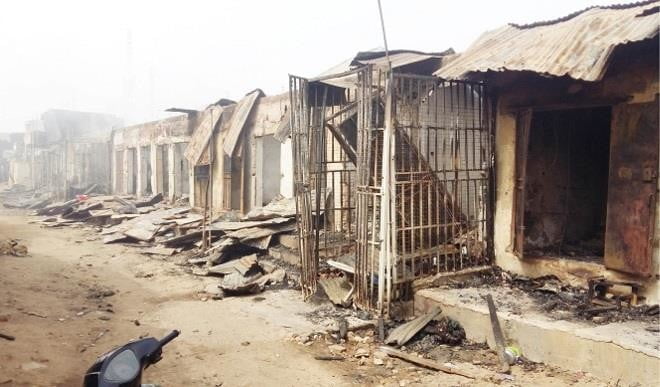 No less than 48 shops were burnt to the ground in Gombe old market, destroying properties worth over N40 million.

According to Daily Trust the fire which started around 1 am was suspected to be from an electrical fault when electricity was suddenly restored to the market.

The fire affected the section of the market occupied by traders of cosmetics and tailors.

Chairman of the market, Alhaji Mohammed Abba Aliyu, said 48 shops were affected by the inferno. “It was around 1am when I received a call that there was a fire outbreak at the market I rushed and on my arrival, I meet a team of policemen and men of the fire service putting off the fire,” he said.

Alhassan Abdullahi who owns a cosmetic shop, said: “When we reached the market around 3am we could not get access to our shops. We were watching when the fire burnt down our shops. I am into cosmetics business and I lost over N2 million in the incident.”

Chibeza Raymond, another cosmetics dealer, said he lost over N7 million to the inferno. “I have two shops and just yesterday I stocked my shops. They were both destroyed by the fire. I could not remove anything,” he said.