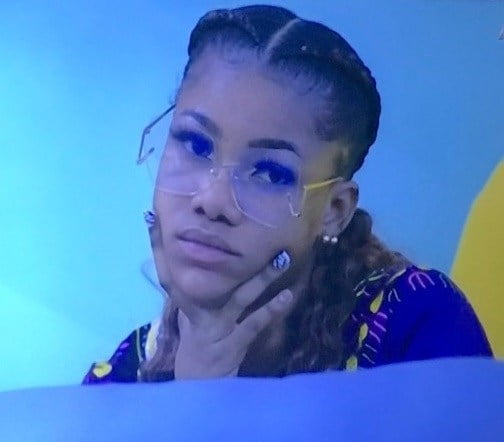 A storm of reactions by Nigerians has greeted the definition of “characteristics” by Tacha, one of the housemates of the ongoing Big Brother Naija 2019 reality television show tagged “Pepper Dem.”

Apparently displeased with her response, Ebuka asked Tacha to define characteristics and she responded again with ” me, Tacha“, asked if she is a characteristic and she replied “yes.”

Moments after he response, Nigerians took to the micro-blogging site, Twitter to react to her definition.

What is the value of beauty, ass and boobs without brain? #Tacha pic.twitter.com/kHkvSENVuU

Khafi: I felt like you could have used that opportunity to sell yourself

Tacha: How can you sell what is already sold

Tacha: I felt he was trying to be cunny and I answered the way I felt fit.

My daughter knew why she decided to floor Ebuka. #BBNaija #TACharacteristics

Teacher: What’s the synonym of “Characteristics” and use it in a sentence.

??
Khaffi: Ebuka gave u an opportunity to sell urself
Tacha: how can I sell what’s already sold.
Khaffi:U could have just said “you don’t take nonsense, you’re a straight forward person”
Tacha: Oh is that the characteristics?
Chai Pride plus empty skull ??. #Tacha #BBNaija pic.twitter.com/7cjrNiXS30

What if Tacha’s real name is Natasha bt she cant spell it so she decides to use Tacha.? #BBNaija pic.twitter.com/Grhjj9kCAX

Early #MondayMotivation Gbas gbos ?
Nigerians ooo
Local man takes back his destiny from #Tacha ?? after seeing her #Characteristics when Ebuka questioned #Tacha just a month after he sold his destiny to her ? pic.twitter.com/7L2ZXB337U