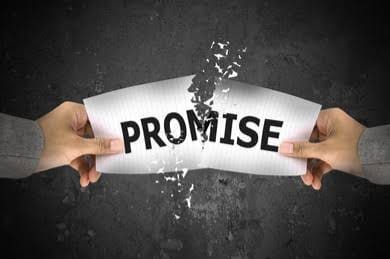 The electoral season is upon us, political parties and politicians have started campaigning for political positions in the country ahead of the 2023 general elections.

With few days to the 2023 presidential, national assembly and governorship elections, politicians have been divulging their plans and agenda for Nigerians.

However, over the years, there have been issues of politicians keeping to their promises after winning their desired political offices.

Nigerians at one point or another have questioned politicians for failing in their promise, while others wait for election season to pay back their representatives in government by voting them out.

We have seen cases of constituents attacking politicians for not being mindful of their needs and fulfilling promises.

Questions have been raised if these politicians forget the promises they made to the people that elected them because of the comfort of their office or because of the economic state of the country.

Human rights activist, Segun Awosanya, popularly called Segalink, disclosed to Naija News that some political officeholders are in government intending to control every sector for their desire and not to attend to the needs of Nigerians.

He said, “Our firms, government as well as individuals, seek dominion across the spectrum. Those in the business sector want to dominate the market, dictate pricing and profit perpetually from the market. Little wonder the aim of most is usurping political power enough to own everything that works across sectors. It explains why politicians own/fund media outfits since the very first leg to ruling the market is to control group minds, beliefs and ideas of the masses.

“When Monopoly is ignited (especially in our clime, with the aid of government), the consumer no longer has a choice, prices escalate and innovation plunges with the forceful gag on the voice of the consumer public. Since we are being factual, looking around you today, you will see glaringly that this is the summary of what is happening across the spectrum, while our government pay lip service to create enabling environment or ease of doing business on paper.”

Speaking on how those in power take advantage of their access to power to oppress others around them, Segalink said, “In sane climes, the task of Government is to ensure equity across the market (including the socio-political clime), making sure Monopoly is discouraged via objective and lawful intervention to create a level playing field for all. But sadly we pretend that there is a market in Nigeria. We pretend we have a choice despite the ironies that proliferate our economic and social-political clime. Even the ruling party tries as much as possible to obliterate the opposition, under the pretence of fighting corruption just to eradicate the thought of an alternative, while maintaining a political monopoly.”

Segalink noted that we are all guilty of allowing such people into government, giving an example, he said, “You fearfully played into the hands of the aberration that promised you better Economy, Security, N1=$1 and other inanities you couldn’t process when emotions were high under the strain, silent obedience and consent but fairness, equity, Justice are more than words. They are perspectives. If the crimes of this government remain unknown to you then I would suggest you look into the eyes of your children and confess your complicit as it blights their future.”

Giving his advice on how we can end cases of politicians fulfilling their promises, he said, “there is no iota of Truth in the assumption that at a certain point in our lives, we lose control of what’s happening to us, and our lives become controlled by fate.” We have the power, rights and choice to dig our feet in and say ENOUGH! Power in the hands of those that lack honesty lacks a moral compass, without which it runs amok and bathes in the blood of innocent citizens. We sure can put an end to this for our children’s sake.

“Our situation is not fatalistic. Success, victory and triumph in life come when we all simply refuse to give up, with goals so strong that obstacles, failure, and loss only act as motivation. It is time the people begin to structure, galvanize and organize themselves in unity. Enlighten yourselves and build systems via strategic communication towards the deliverance of our country. It is time to arise, o compatriots, to Nigeria’s Call…will you Obey?”