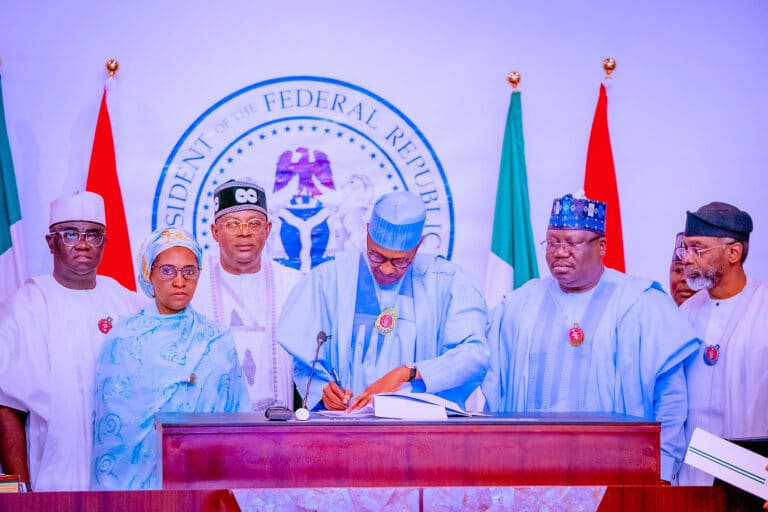 President Muhammadu Buhari Tuesday signed into law his government’s eighth and final appropriation bill, despite unreconciled and frivolous estimates transmitted to him by the National Assembly. Although the parliament jacked up the budget by a whopping N1.32 trillion (or 6.1 percent) to N21.83 trillion, the President still appended his signature, hoping that the parliament would “cooperate” with his Minister of Finance, Budget and National Planning, Zainab Ahmed, in reconciling the discrepancies. Perhaps, what the federal government cared about was its commitment to the January to December budget cycle.

Nigeria may just not have a budget for the 2023 fiscal year if revelations from Wednesday’s public presentation and breakdown of the highlights of the 2023 Appropriation Act are anything to go by. The framework for funding the budget essentially does not exist! For starters, the Director General of the Debt Management Office (DMO), Patience Oniha disclosed in the forum that the administration taking over on May 29 would inherit about N77 trillion in debt. It is sobering that none of the presidential candidates in this year’s general election who were on the soapbox when this disclosure was made didn’t think it wise to weigh in on the matter or proffer practical solutions to the cul-de-sac which the country has been led into.

As it were, what the Buhari administration has done with the 2023 budget is to continue digging when the country is already in a deep hole. It is within this context that the dismissal of the budget as hopeless by former World Bank Vice President, Oby Ezekwesili can be better appreciated. Her tweet read partly, “Total Expenditure is N21.83 Trillion. Total Revenue N9.73 Trillion — the Budget has a Deficit larger than Revenue by almost N12.00 Trillion! Tragic.” What the erstwhile minister of education said is quite reflective in view of contradictions that top government functionaries could not clarify while giving a breakdown of the budget. They all but made it clear that what awaits the next administration is an empty treasury. The humongous debt burden notwithstanding, the Finance minister says the federal government was not considering debt restructuring.

She pointed out that Nigeria utilizes appropriate debt management tools to streamline the cost and risk profile in the debt portfolio, including through concessional loans, spreading out of debt maturities to avoid bunching, and re-profiling of the debt maturities by refinancing short-term debt using long-term debt instruments. Naija News is quick to ask if these aren’t the same tools that have brought the country’s finances to its knees. Minister Ahmed also said that the government will look towards non-oil sectors like ICT and Agriculture where we made more money in 2022 to fund the 2023 budget. If these sectors were that money-spinning, wasn’t the 2022 budget a deficit one? It’s also contradictory for the minister to be so confident of Nigeria moving from being a mono-economy whereas President Buhari while signing the appropriation bill, tasked relevant agencies to work towards ensuring that Nigeria meets her oil production quota.

Some projections in the budget have been found to be at variance with the reality on the ground. For instance, the 17.6 percent projection for inflation even though it is currently over 21 percent. The exchange rate benchmark of N435.57 per dollar is also unrealistic and may lead to a loss of revenue. The growth rate of the Gross Domestic Product (GDP) was put at about 3.7 percent when experts are saying that the country should rather be aiming at a double-digit growth rate to be able to get out of the woods. Even the N10.4 trillion revenue generation projection is highly unrealistic in view of what was recorded in the past and that this is an election year. Against the backcloth of the 2023 budget coming with an unfunded deficit of N553.46 billion, the federal government is looking at breaking the law as the solution.

The Buhari-led administration had repeatedly breached the Fiscal Responsibility Act (FRA) which stipulates that the fiscal deficit in the budget should not be more than three per cent of the annual GDP. The Finance minister could even say with a straight face that they are working with the National Assembly to try to review that provision of the Act to make more room for the government to increase the deficit. But why first break the law before thinking of amending it? Yet, there is a bureaucracy known as the Fiscal Responsibility Commission maintained by taxpayers which should advise the government and guard against such infractions!

As if this is not enough, Oniha says the government will get some reprieve if the National Assembly finds a way to securitize the N22trn borrowed through Ways and Means Advances. This is an instrument through which the Central Bank of Nigeria (CBN) finances budgetary gaps in the government. Section 38 of the CBN Act, 2007 stipulates that the apex bank may make short-term advances to the federal government in the event of a temporary shortfall in budgetary revenue at an interest rate that the bank deems appropriate. However, “all advances shall be repaid as soon as possible and shall, in any event, be repayable by the end of the Federal Government financial year in which they are granted and if such advances remain unpaid at the end of the year, the power of the bank to grant such further advances in any subsequent year shall not be exercisable, unless the outstanding advances have been repaid.”

Aside from the World Bank advising the Nigerian government last November against funding budget deficits through Ways and Means Advances in order not to pile fiscal pressure on the nation’s expenditures, the CBN reportedly warned that the consequence of such borrowings is “distortions or surges in monetary base leading to an adverse effect on domestic prices and exchange rates i.e macroeconomic instability because of excess liquidity that has been injected into the economy”. It is therefore unconscionable for the government to be calling for the securitization of these advances for upward of 40 years which will yoke even the unborn generation. The entire country is already feeling the pinch of such financial indiscretions because when the apex bank arbitrarily prints money for the federal government, it tells on the inflation rate.

Ahmed even disclosed that the President will be signing the vexation Finance bill in a matter of days. This is the same piece of legislation that has overtaxed every sector of the economy, taking the corporate tax to over 36 percent, increasing the education tax to 3.5 percent, CIT rate for a gas-flaring company from the standard 30 percent to 50 percent so much so that Nigeria Employers’ Consultative Association (NECA) cried out for being burdened with over 50 different taxes, levies, and fees. How can investors be attracted to such an economy? It is feared that unemployment may just hit the roof. This is the same Finance Bill that the government is now recoursing to was surreptitiously passed by both chambers of the National Assembly. We demand that the Finance Bill must not be signed until the concerns of stakeholders are addressed.

Government officials and apologists will always pull the wool over the eyes of Nigerians with claims that the country has not yet surpassed the recommended threshold for borrowing. They had better stopped deceiving the populace with the supposed healthy debt-to-service ratio which is one of the best in Africa. The chronic revenue problem faced by the country rubbished this claim. While Nigeria’s per capita spending on her citizens is $180, South Africa spends $2,156 as against Egypt’s $962. Since Nigeria’s spending per citizen is less than 20 percent of what other leading economies spend on their citizens, it’s disingenuous for the Nigerian government to compare with these countries’ debt-to-service ratio.

The 2023 budget has exposed the underbelly of the Buhari administration. When it should be finishing strong, the current government’s twilight budget is being dismissed in worst adjectives. Repercussions always follow the sacrifice of merit for mediocrity. The country now has to pay the steep price for nepotism, parochialism, and a subservient legislature. What has become of the 2023 budget is clearly an accumulation of recent years’ irresponsible behavior in the commanding heights. If the President had cared to constitute a resourceful cabinet of eggheads and technocrats, the country wouldn’t have come to this sorry pass. Such a team would have long before now come up with creative solutions to the country’s revenue shortfalls.

It is therefore our considered opinion that not until Nigerians get the leadership question right, there may not be an end in sight to this tailspin where government fears there may be no funds for capital expenditures. This year’s general election provides a rare opportunity for Nigerians to elect frugal leaders who will move the country from consumption to production. Anything to the contrary amounts to the country digging deeper into a hole that not even future generations will recover from. Nigerians must vote wisely, even if for the sake of their unborn children!