The details of the meeting between Governor Nyesom Wike of Rivers State and four other governors of the Peoples Democratic Party (PDP) have emerged.

Naija News had reported that the five PDP governors led by Wike met on Sunday in Enugu, the Enugu State capital for a strategy meeting.

Aport from Wike, other governors present at the meeting were the host, Ifeanyi Ugwuanyi of Enugu, Governors Okezie Ikpeazu of Abia, Samuel Ortom of Benue and Seyi Makinde of Oyo State.

Speaking with The PUNCH, a member of the PDP National Working Committee said the five PDP governors met in their quest to ensure that the National Chairman of the party, Senator Iyorchia Ayu, resigns from office. 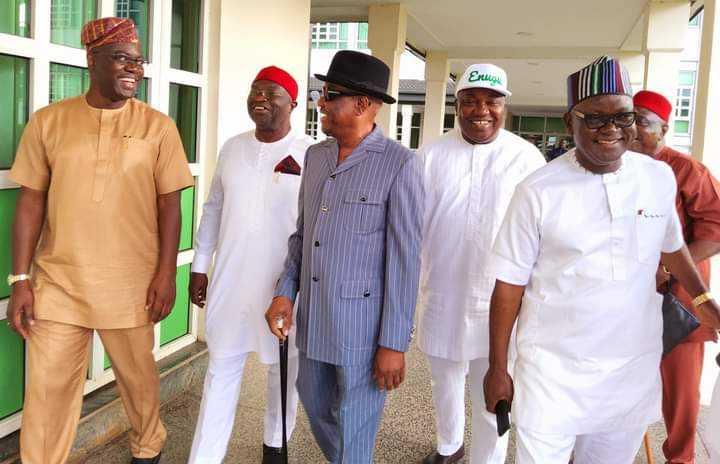 He pointed out that the governors met to discuss how to make the party and Nigeria great again, saying they should be commended for championing the cause of justice and equity.

He said: “The big five governors are meeting, strategising for a better PDP, a better Nigeria where probity, equity and justice reign supreme

“They are united for a purpose to ensure Ayu is sacked for the unity of our party. Ayu must go.

“It is a pity that some have chosen to shut up but these ones (governors) are insisting on the right thing to be done; we have to congratulate them.

“PDP is for all. No one, however powerful, owns it more than others. This is the message they are trying to pass. We will get there.”

Also, a member of the Wike camp said the Rivers governor briefed his colleagues on the meeting he had with the PDP presidential candidate, Atiku Abubakar, in Abuja last week Thursday.

He said the governors met and gave Atiku some conditions to meet before any meaningful talk with the former Vice President could happen.

The PDP chieftain added that the governors met to consider the proposals offered to Wike by both the All Progressives Congress presidential candidate, Bola Tinubu, and Labour Party candidate, Peter Obi.

“The meeting in Enugu is to review Atiku’s visit to the Rivers governor in Abuja. They had told him at the meeting that Ayu must go and that the condition is not negotiable. They also gave him some other conditions.

“Atiku agreed that Ayu would go but due process must be followed to avoid a constitutional crisis. So, the aggrieved governors are meeting to fashion out plans for Ayu’s exit and also review some of the conditions they gave to Atiku. They will also look at some of the things Atiku said at the meeting with Wike,” he explained.