Naija News understands that a Twitter user, Chijioke Ekwulu, had in a now-deleted tweet thread claimed that not less than 14 babies died in incubators at the teaching hospital due to a power outage.

Ekwulu also alleged that some surgery procedures were suspended at the hospital due to the irregular power supply. 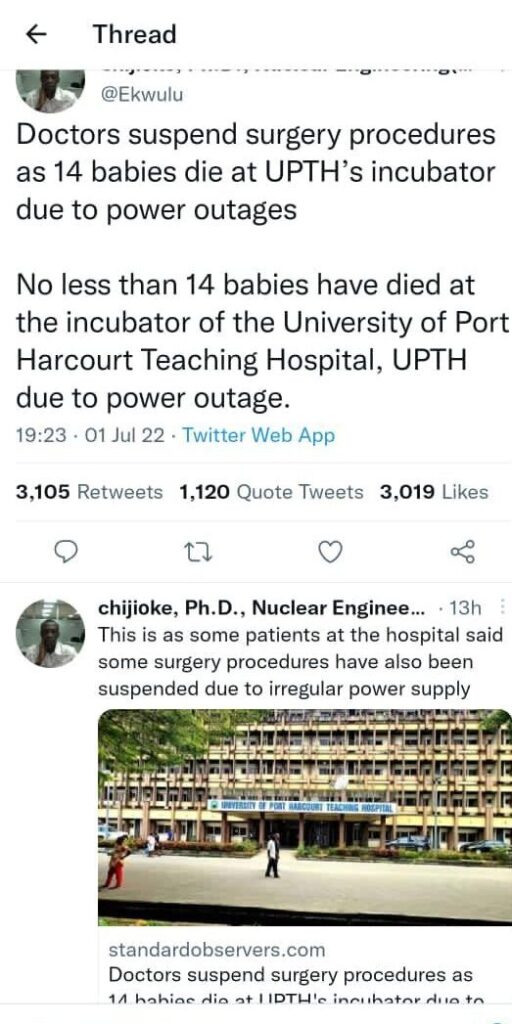 Reacting, the Chairman of the UPTH Medical Advisory Committee, Professor Lucky Onotai, described the claim as fake news which should be ignored.

In a chat with TheCable, Onotai stated that there was no record of any baby’s death in the hospital, stressing that some people just want to spoil the hospital’s reputation.

He, however, confirmed there were some issues with the hospital’s transformer but insisted it did not affect the special baby care unit, where the incubators are kept.

He said: “I don’t know why people like to thrive on fake news. I have said this before, nothing like that happened. People just want to tarnish the hospital’s name.

“Yes, there was a power outage, but there are special departments that have dedicated generators on standby. One of them is the special baby care unit. It is impossible for power to go out that long. If anyone died, why haven’t the mothers come forward?

“The hospital’s PRO has also confirmed that it is fake news. We receive hospital statistics every day, but nothing of such has happened. People like to spread false news like a wildfire in a dry harmattan.”