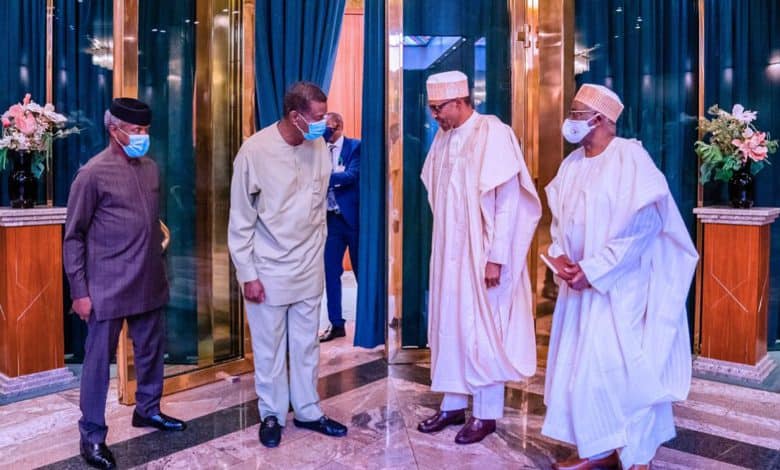 Presidential Spokesman, Femi Adesina has berated some religious leaders in the country over their criticism of the Muhammadu Buhari government.

Adesina stated that “unguarded comments” made by these religious leaders contribute to the security challenges faced by the country at the moment.

The presidential aide accused some Christian and Muslim preachers of working closely with the opposition and critics of the President to sabotage his administration.

In an article released on Thursday night, Adesina said the Buhari government would no longer accept any uncouth language used by some preachers in the country today.

Naija News reports that Adesina was reacting to comments made by the General Overseer of the Redeemed Christian Church of God, Pastor Enoch Adeboye and the sacked Chief Imam of Apo Legislative Quarters Mosque, Abuja, Sheikh Nuru Khalid.

In their sermons over the weekend, both preachers were very critical of the Buhari administration over the country’s failing economy and rising insecurity.

Both preachers condemned the recent bombing of an Abuja-Kaduna train by terrorists and the nefarious activities of the criminals in the North.

Irked by these statements, Adesina cautioned the preachers against making unguarded comments that can further inflame the insecurity in the nation.

The presidential aide asserted that regardless of the hate for his principal, Buhari was going to end his tenure well with good legacies.

He said, “If a preacher brings down fire seemingly from Heaven, but speaks evil about the leadership of his own country, he impresses me not. Because the Good Book enjoins us to pray for those in authority, for there can be no power, except the one God has ordained. He installs kings and deposes them.

“Even as a preacher, Christian, Muslim, God has not ceded that authority to you. He sits in Heaven and makes the earth His footstool. The clouds of the sky are the dust of His feet. That is God, and no man should compete with Him. But uncouth language is the stock-in-trade of some preachers today. Words are no longer seasoned with grace.

“Most of those who utter incautious, inflammatory words about the state of insecurity in the land, only want power through the back door. Some had never liked Buhari, so he must fail. Others supported him in the past, thinking they would be able to lead him by the nose. When they failed, they said he wouldn’t get a second term in office. Before their very eyes, he coasted to victory. Still they are unrelenting in their opposition. But there’s nothing you can do against a man who God has ordained for certain roles.

“It’s funny to hear some others asking the government to quit. And so, what follows? Disorder. Higgledy-piggledy. People running helter-skelter, insurgents and bandits taking over. They don’t care about the country, nor about the people. When things burst, they take the next flight out of the country in first-class seats.

“The security challenges we have are being tackled. Robustly. President Buhari, more than any other leader in the past, has equipped, trained, and motivated the security agencies, who are rising to the occasion, with many of them even paying the supreme price. To be condemnatory of the entire effort is to be unkind, evil, and unappreciative.

“Some people merely excoriate without suggesting viable alternatives. What can our security agencies do better? How can they do it? No, that is not in their agenda. All they want to see is that Buhari should fail, and fall. But they are not God.

“What the times call for is an encouragement of our security forces, not wanton denouncement or chastisement of their work and sacrifices. ‘May God bless our troops’ should be the singsong, not petty politics and grossness.“Nigeria will win the war against evil. The Buhari government will win the war of tongues unleashed against it. Happily, the majority of Nigerians know the truth. They may not have the platform to speak out like the vocal minority, but they know those truly serving them, and those merely interested in sticking their snouts in the nectar of office. The year 2023 will show.

“Unguarded comments can further inflame the insecurity in the land, and it surely does. And those shooting off their mouths know what they are doing. They want things to become topsy-turvy, jumbled, so they can come out and say, ‘we told you.’ But they won’t succeed, because God is interested in Nigeria, and in a lot of millions of helpless people. That is why President Buhari will land safely, and soundly, to the glory of the Almighty.”