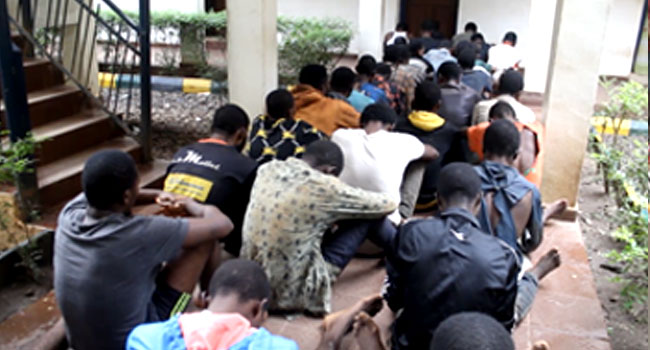 Amidst the security challenges in the South East, the outlawed Indigenous People of Biafra (IPOB) has accused Nigeria’s security operatives of illegally detaining innocent youths in the region.

Naija News reports that IPOB made the accusation in a statement issued by its spokesman, Emma Powerful, on Thursday.

The Biafra group alleged that security agents in Imo have been illegal picking up innocent residents for the past seven months and tagging them as IPOB members.

IPOB statement reads: “We the global family of the Indigenous People of Biafra (IPOB) ably led by our great leader Mazi Nnamdi Kanu condemn the numerous attacks and incessant abduction of the people of Orsuihitekwa, Nkwere and Orlu Local Government Area in Orlu, Imo State by a combined team of the Nigeria security agencies.

“Since seven months ago, they have invaded this community of Orsuihitekwa and environs with armoured tanks and fighter jet that resulted to the death of many innocent people, it is yet to be reported in the media. So many people ran away abandoning their ancestral homes and lands but (Governor Hope) Uzodinma doesn’t care about the fate of these innocent folks.

“A few months back, some villagers returned to the village only to discover that their village had been taken over by hoodlums and bad gangs recruited by Hope Uzodinma and his All Progressives Congress members in Imo State.

“But unfortunately, when these innocent folks alerted security agents of this sad development, instead of the double-faced and compromised security agents to go after the bad boys, they rather resorted to the mass arrest of the innocent youths in the community after a gun duel with the hoodlums. What a country!”

IPOB also disclosed the names of some Imo youths allegedly detained by security operatives in the state, asking the authorities to release the victims unconditionally.

The Biafra group advised the Nigerian military to stop unleashing mayhem on the people and stop treating the youths as criminals.

“These people are innocent and should be released unconditionally. They are not criminals as being tagged by the security agencies. Nigerian security (agencies) must stop unleashing mayhem on the people because they are Igbo or Biafrans. The corrupt politicians who connive with the security agencies to oppress our people should be ready for the day of accountability for it will surely come.

“The world should prevail on Hope Uzodinma, Nigerian Army Commander in Imo State, Police Commissioner in Owerri and DSS (Department of State Services) Director in Imo State to release these innocent citizens arrested from Orsuihiteukwa and environs unconditionally and ensure they stop killing them one after the other. IPOB is bringing the secret killing of these innocent Biafrans to the notice of the world to halt the barbarity.

“We are calling the civilised World, European Union (EU), African Union (AU), Amnesty International (AI), and other reputable human rights organisations across the globe to intervene and prevail on the Nigerian government, army, police and DSS to stop arresting innocent citizens of Biafra and release those illegally arrested at different communities in Enugu State and Imo State.“

Don’t Drag Us Into Your Rift With Okorocha, IPOB Tells Uzodinma