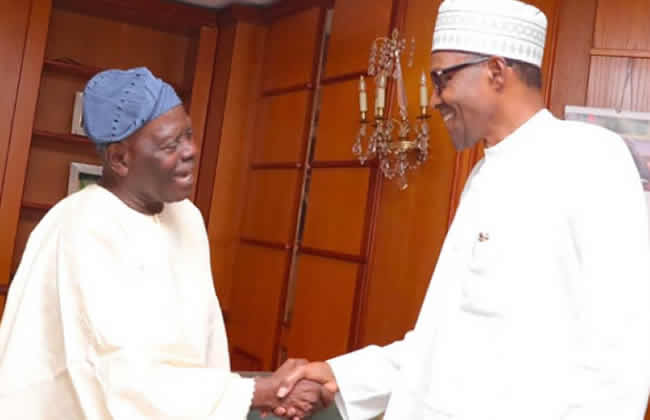 Former National Chairman of the All Progressives Congress (APC) Chief Bisi Akande has said he doesn’t envy the position of President Muhammadu Buhari as the leader of Nigeria.

Akande who observed rightly that many things are wrong with the country said the people blame the President for everything even when it’s obvious not all is his fault.

The elder statesman added however that such is to be expected of anyone who is a leader because the buck starts and ends on the leader’s table.

He made his view known on Thursday in Lagos at the Eko Hotel and Suites, Victoria Island, Lagos during the public presentation of his autobiography, “My Participations,” which had in attendance President Buhari and many others.

He said: “We (Nigerians) know you love the country, but we want Nigeria to be peaceful, to prosper. We abuse you for everything that is wrong in the country.

“We know we are fraudulent, cheaters and for all the wrongs we still blame you for it. I don’t sympathize with you because you applied for the job.”

Others are Governor of Yobe State, Mai Mala Buni, Governor of Ogun State, Dapo Abiodun, and many others.

It will be recalled as previously reported by Naija News that apart from attending the book launch, President Muhammadu Buhari who was received at the Presidential Lounge of the Murtala Muhammed Airport by the Lagos state Governor, Babajide Sanwo-Olu also inaugurated the second indigenous Seward Defence Boat built by the Nigerian Navy.

Why I Am Vying For APC National Chairmanship — Al-Makura