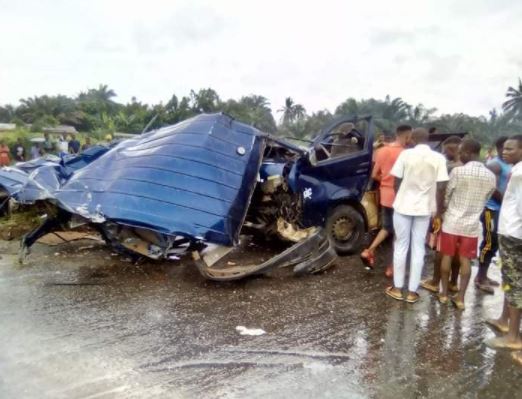 Passersby were reportedly sceptical about helping the victims due to the intensity of their injuries, Naija News learnt.

However, the Director of Kwara State Fire Service, Prince Falade John Olumuyiwa was timely to rescue two persons involved in the road crash.

The development was confirmed to newsmen in a statement issued on Saturday, December 4 by the Head of Media of the fire brigade, Hassan Adekunle.

Adekunle revealed that one of the newly Skytic Hilux Vans purchased by Governor Abdulrahman Abdulrazaq for the fire brigade was used to convey the victims to the hospital for immediate medical attention.

Speaking on his rescue effort, the Fire Service boss, Olumuyiwa said: “I met them helpless on the road with blood seriously gushing out from their bodies then I stopped and took them to Ola-Olu hospital.

“No one could near them because they were all afraid of their conditions but I did so as rescuing had become part of me,” the Director added.

Olumuyiwa, however, urged residents to promote good driving methods in the State and stop wasting lives on the roads.

Barely a week ago, about twenty persons reportedly burnt to death in a fatal road accident in Jigawa State.

Naija News learnt that the fire engulfed after two moving Golf vehicles collided along Achilafiya to Karkarna road in Yankwashi local Government Area of the state.

Reports gathered that passersby had attempted to put out the fire but due to its intensity, no one could stop the inferno. The raging fire resulted in the death of occupants of the vehicles including the drivers and passengers.

Confirming the incident in a statement issued on Monday, Spokesman of the Police Command ASP Lawan Shiisu Adam said “the accident occurred on Sunday at about 5:00 pm along Achilafiya to Karkarna Road, involving a Golf with reg no. XA 361 BCH and Golf Wagon with reg no. FST 276 CX.”