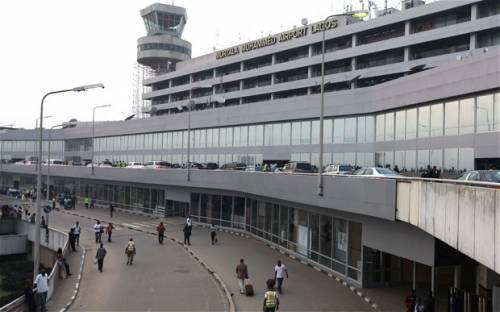 Security operatives have arrested a passenger who destroyed properties worth thousands of naira at the Murtala Mohammed Airport Lagos after missing his scheduled flight.

According to reports, the passenger who was supposed to travel on an Egypt Airlines flight to Cairo came to the airport to check-in only to discover the check-in counter had closed.

Naija News learnt that the passenger went berserk after he was told by the airport staff to go and reschedule.

The passenger who’s yet to be identified as of the filing of this report destroyed properties worth thousands of naira before he was whisked away by security operatives.

In another news; a Nigerian man has expressed shock after allegedly finding a snake inside a pack of bottled water in a store.

While sharing the photos in a post on Twitter, the man revealed that the snake managed to stay hidden and remained undetected

The snake which looks dead was found nestled inside a bottled water pack. See photos here

Photos shared online show the snake in the pack of bottled water and also on the floor after it was removed from the pack.

Related Topics:Murtala Mohammed Airport
Up Next