According to Bashir El-Rufai via his verified Instagram stories, while expressing how much he missed his wife, disclosed that he had to go sit inside her car so he could just smell her scent.

Sharing photos of his wife car, he wrote; ‘I miss my wife, had to use her car, just so i could smell her scent again.’ 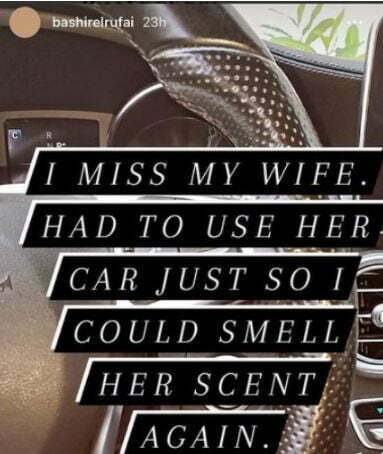 Naija News recalls that Bashir recently took to social media to gush about his wife, Halima Nwakaego Kazaure, while stating that she is the greatest thing that has happened in his life.

He made this known via a post shared on Twitter, where he pressed how glad he is to be married to someone who is a lot smarter than he is.  Though it was not their wedding anniversary, however,  Bashir penned the lovely message to celebrate his wife’s contribution to his life.

Bashir tied the knot with Halima Nwakaego Kazaure, his lover on the 21st of November, 2020.

Related Topics:Bashir El-Rufai
Up Next