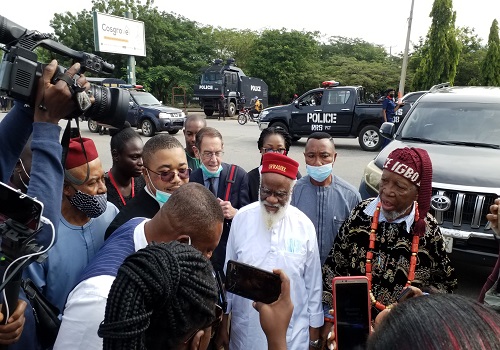 Former Anambra State Governor, Chukwuemeka Ezeife, is presently at the Federal High Court in Abuja to witness the trial of the leader of the proscribed Indigenous People of Biafra (IPOB), Nnamdi Kanu.

Ezeife, who is attending Kanu’s trial for the third time, and the lawyers were, however, barred from accessing the courtroom by operatives of the Department of State Services (DSS).

Recall that the President General of the Igbo group, Professor George Obiozor, had appointed Ezeife to lead a delegation to the trial of Kanu.

Kanu, who was re-arraigned before Justice Binta Nyako of the Abuja Division of the Federal High Court, is facing a seven-count amended treasonable felony charge the Federal Government preferred against him. He had pleaded not guilty during his last trial on October 21, 2021.