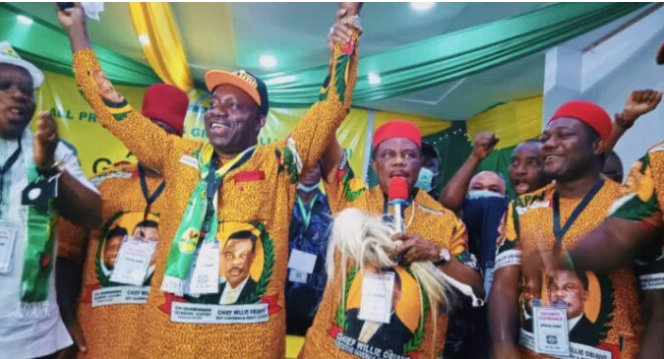 The candidate of the All Progressives Grand Alliance, APGA, Charles Chukwuma Soludo, has been declared the winner of the Anambra governorship election.

The former Central Bank governor was declared the winner by the Independent National Electoral Commission, INEC.

Naija News reports that Soludo’s victory was announced by the Returning Officer of the Anambra governorship election, Florence Obi.

Soludo emerged winner with 112,229 votes to defeat Valentine Ozigbo of the Peoples Democratic Party, who got 53,807 votes, and Andy Uba of the All Progressives Congress who got 43,285 votes. Senator Ifeanyi Ubah of the Young Progressive Party polled 21,261 votes came fourth.

The adviser to President Muhammadu Buhari is expected to be sworn into office next March after the expiration of the two-term tenure of the incumbent governor, Willie Obiano, who is also of the All Progressives Grand Alliance

Recall that Soludo had encountered many battles during the run-up to the election.

The former CBN governor had to battle in courts up to the Supreme Court to grab the governorship ticket of APGA.

Also in April 2021, gunmen had attacked Soludo during a town hall meeting in his hometown in Isuofia in the Aguata Local Government Area of Anambra, where three of his security aides were killed.

Soludo dedicated his victory to the three policemen in his acceptance speech on Wednesday.