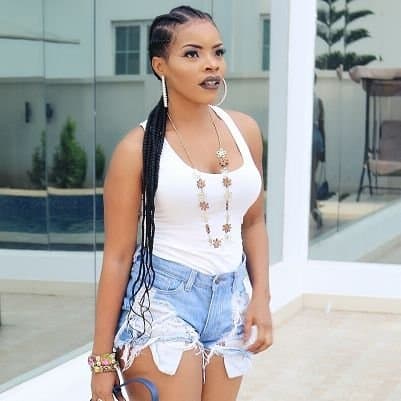 The younger sister to Linda Ikeji took to her Instagram page to reveal that she had gotten a new chin.

She said: “I bought a new chin from @iamdrbea .
Pls respect yourselves n not abuse me o. This is my page”

Naija News recalls that the mother of two had also gotten some work done on her nose earlier in the year.

She had posted before and after pictures on Instagram, showing appreciation to the doctor who had gotten the job done.

Laura was called out in the past for bleaching her skin when she posted some pictures of herself looking fairer but she stated that she had done no such thing, adding that she was simply toning her skin.

Meanwhile, Billionaire daughter, Ifeoluwa Florence Otedola, better known as DJ Cuppy has opened up about dating a bus driver while speaking about her dating life.

According to the billionaire heiress during an interview with the Zeze Millz Show, she’s on a dating app that costs 400 pounds to join.

Speaking about the difficulty she’s faced with finding a suitable partner, Cuppy talked about going on a date with all sorts of men, including a bus driver. Read More

Related Topics:Laura Ikeji
Up Next

Burna Boy Rewards Fan For Singing Along To His Song (Video)

DJ Cuppy Opens Up On Dating A Bus Driver, Reveals How Much She Pays On Dating App