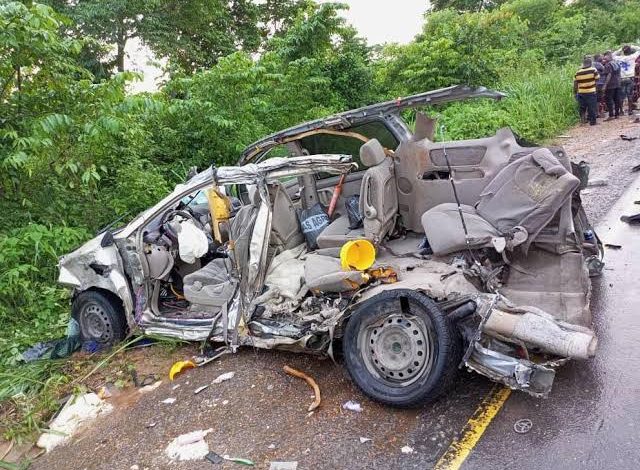 The State Sector Commander of the Federal Road Safety Corps, Yusuf Abdullahi, confirmed the incident in a statement made available to newsmen on Monday, November 8

Abdullahi revealed that no fewer than fifteen other passengers in the 21 capacity vehicle sustained varying degrees of injuries.

The vehicle, Naija News learnt belonged to the Kano Line of the Kano state government transports. The FRSC commander told reporters that the fatal crash happened on Sunday morning at about 11:30 am at Kwanan Digiza, along Jama’are-Azare road.

The vehicle, belonging to the Kano Line of the Kano state government, had 21 passengers in it when the incident happened. The fatal crash was said to have occurred on Sunday, at about 11:30 am at Kwanan Digiza, along Jama’are-Azare road.

Abdullahi said, “The accident happened on Sunday, November 7, 2021, at 11:30 am at Kwanan Digiza, along Jama’are-Azare highway. It involved a commercial Toyota Hiace Bus which has the number plate — KN21-H41. It is a vehicle belonging to the Kano Line. It was caused by overspeeding, the vehicle went off the road and crashed.

“The crash involved 21 people, four male adults, 14 female adults, one male child and two female children. Immediately, our men at the Azare office were called, our personnel rushed to the scene of the crash for the rescue operation.

The FRSC boss further explained that the government officials upon arrival at the scene immediately rushed the victims to the Jama’are General Hospital for medical treatment and confirmation.

“Upon arrival, six female adults were confirmed dead by a medical doctor while 15 others sustained varying degrees of injuries. The injured victims are made up of four male adults, eight female adults, one male child and two female children,” Abdullahi revealed.

The FRSC boss lamented the menace of overspeeding by motorists which have often led to the loss of lives and properties across the state.

He said: “When we flagged off the ember months campaign, what we charged drivers on was for them to maintain a safe speed limit but they don’t. You can imagine now, this lone crash has claimed the lives of six people from different families, imagine this kind of calamity.

“We call on drivers to be mindful movement of the way they drive on the road. They should always drive at a reasonable speed and they should obey all traffic rules and regulations so that crashes can be reduced to the barest minimum,” he stated.