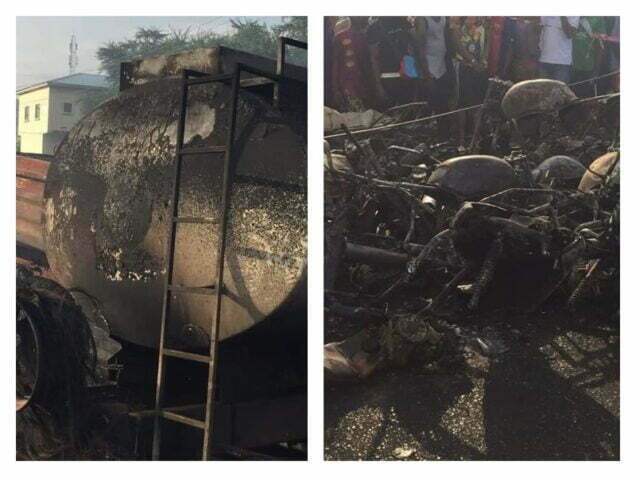 No fewer than 99 people and more than 100 people have been injured in a fuel tanker explosion in Freetown, Sierra Leone.

The victims’ of the explosion were those who went to collect fuel leaking from the ruptured tanker, Mayor of Port city, Yvonne Aki-Sawyerr, revealed in a post on Facebook.

Brima Bureh Sesay, head of the National Disaster Management Agency also revealed in a video on Facebook that those who died were much, with some of the bodies burnt beyond recognition.

In a video shared online people are seen running through smoke after the explosion occurred.

Deputy health minister, Amara Jambai told Reuters that those who were wounded were being treated in hospitals and clinics across the capital.

In other news, the Senator representing Gombe Central in the National Assembly, Danjuma Goje, has accused Governor Inuwa Yayaha of sending thugs to attack his convoy on Friday.

Naija News had reported that some political thugs attacked the Gombe Central Senator as he was about to enter the state capital for a personal engagement on Friday.

The spokesman of the lawmaker, Lilian Nworie, accused the state governor of being behind the attack, adding that the attack was led by the governor’s aide-de-camp.

In a swift reaction, the Gombe State Government has denied the claim made by the former governor, accusing him of importing thugs into the state to cause mayhem and unleash violence on innocent citizens.

The lawmaker stated that the peace of the state should be paramount to residents of the state, saying that he would not use his hand to destroy what he built over the years in the state. Read more