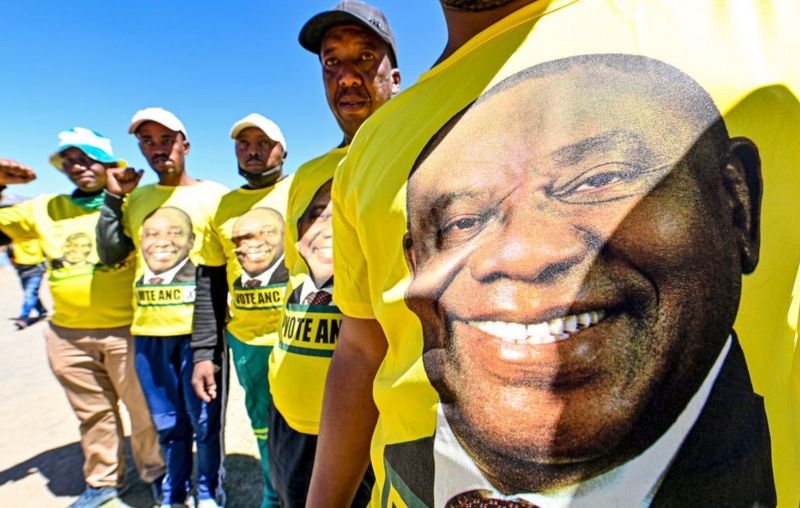 The ruling party in the South African National Congress (ANC) has received less than 50% of the vote in South Africa’s democratic history.

The results of Monday’s election have left Nelson Mandela’s party in a state of disarray.

Julius Malema, the leader of the third-largest opposition party in the country, the Economic Freedom Fighters (EFF), said in a statement that the election results were “clear” that the ANC was losing its supporters across the country.

But there is no dominance in the ANC, as opposition parties in South Africa have very different ideologies.

Official results from the election show that:

He acknowledged that their numbers were not enough to defeat President Cyril Ramaphosa, who was elected by the ANC in 2018.

“If we are the ones to make this a new and better time, we as leaders must set aside what separates us.”

The ANC – which has been plagued by corruption allegations in the run-up to the by-elections – is now being asked to eat a small portion and take the lead in reaching out to other parties on how to form a coalition.

Once the Electoral Commission announces the results of the election, there may be a period of 14 days before the Board of Directors convenes its first meeting. The chairman of the council, who must be elected first, then presides over the appointment of the mayor.

Based on the chaos and violence that erupted in 2016, the operation is expected to cause problems and disagreements in a serious way.

The establishment of the fund may also be difficult due to the different political ideologies of the parties that have to negotiate its establishment.

In 2016, the ANC-led party had already begun to lose its supporters.

Since then it has seen five years of demonstrating its importance, instead, many South Africans continue to face problems with poor service delivery such as domestic water, lack of electricity.

The DA – which draws many of its supporters from white voters and members of the mixed-race – had previously said it would not do anything to rule the EFF. That’s when ActionSA said working with the ANC would be tantamount to promoting corruption.

Of course, there is talk of forming a coalition between the ANC and the DA, while the EFF has said it will wait for a party to ask it to work with the coalition as its support for the election has increased.

In the 2016 local elections, the ANC received nearly 54% of the vote nationwide, the DA gaining 27%, and the EFF gaining 8%. In this year’s election, the EFF has taken steps to have supporters, while the DA has lost some of its members who are already known to be at the supporters’ residence.

No doubt in his private presence the ANC leaders see this election result as a major issue for the party. But in front of the ‘cameras’ of the media, party leaders tell a different story.

“We are not defeated, we are a winning party,” said Jessie Duarte, the ANC’s deputy secretary-general.

Negotiations and new partnerships are expected to change the face of South African politics. These elections could be considered as an assessment of what is expected to happen in the 2024 general election, which may be the most important in existence since the end of the white supremacist regime in 1994.