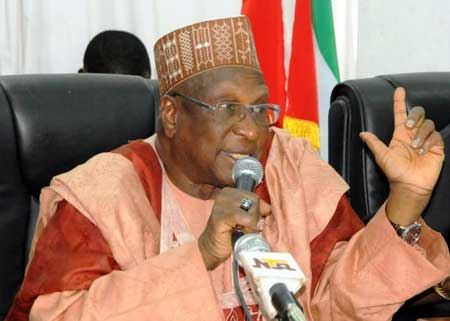 Alhaji Bamanga Tukur is a man that played a huge role in securing debt relief for Nigeria during the administration of former President Olusegun Obasanjo but does not get due recognition for his efforts.

This position was put forward by President Muhammadu Buhari in Abuja on Thursday.

It will be recalled that In October 2005 during Obasanjo’s administration, Nigeria and the Paris Club announced a final agreement for debt relief worth $18 billion and an overall reduction of Nigeria’s debt stock by $30 billion.

The deal was completed on April 21, 2006, when Nigeria made its final payment and its books were cleared of any Paris Club debt.

However, President Buhari has now declared that one person who played a huge role in the debt cancellation process is elder statesman, Bamanga Tukur.

The President, represented by his Chief of Staff, Professor Ibrahim Gambari, made the submission at the public presentation of a book titled, ‘Legacies of a Legend,’ as part of activities put in place to mark the 86th birthday of the former National Chairman of the Peoples Democratic Party (PDP).

He said: “I recall Bamanga Tukur’s activities with Tony Blair-led Commission for Africa in 2004/2005 and how that led to the 2005 G8 Summit landmark decision on debt cancellation for 32 African countries.

“Prior to that, many poor African countries were using a large portion of their little resources to service debt obligations.

“The benefits of debt cancellation were that many African countries were then able to free up resources which they previously channeled into debt servicing and deployed them into socio-economic and infrastructural projects.

“That explained the fact that shortly after, the fastest growing economy was from Africa which perfectly fueled Africa’s rising narrative.

“To my mind, much credit has not yet been given to the role played by Alhaji Bamanga Tukur in the process. We must recognize that now.”