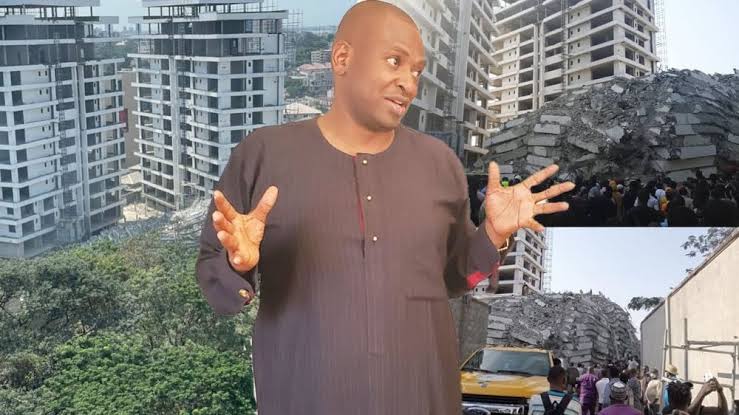 A video has surfaced online showing the moment Femi Osibona, owner of Fourscore Homes, the developer of the collapsed 21-storey edifice in Ikoyi, Lagos state spoke extensively about the challenges of the real estate sector in Nigeria.

In the 33 minutes long clip, dated August 2021, Femi Osibona in an interview with TVC News discussed the issues of surging rents, housing deficits, and over-regulation. Speaking to the broadcaster, he said;

“…. I applied for a 2-storey extension in UK, the council wanted to write 2 storey, they made a mistake. So when we started developing it some people, neighbors went to report. You know when you have a 2 storey in London, you can’t do a 3 storey, 2 storey must go all the way. So they went to report me to the council, the council came, they agreed that they made a mistake, that I should not do the 3-storey, I went ahead and did the 3-storey. Then we went for a committee at the committee I won. That’s how we did the 3 storey….”

Talking about his working relationship with experts, he said:

“When I first came to Nigeria, I believed in consultants so much. If an architect tells me something, I will do whatever he tells me to do…. I later realized that some people they only Know book, they do not understand the practical aspect of the work.”

Naija News earlier reported that Femi Osibona was declared dead on 5th November. This came after he was trapped inside the 21-storey building under construction alongside one of his friends, Bob Oseni.