The photos of Rivers State Commissioner for Special Duties, Onowu Emeka Anyasodike, was allegedly discovered in a shrine in the Ahoada area of the state alongside others.

According to a Facebook user, Dagogo Aches, the photo was said to have been allegedly discovered after an angry mob raided the shrine and arrested the chief priest for burying a 3-year-old baby alive.

The witch doctor who is said to be a resident of Edeoja in Upata Epeye allegedly disappeared when he was beaten up by angry youths with pictures of men who were tied, nailed and chained to different places discovered.

Amongst the discovered photos of men who were tied was that of Hon. Onowu Emeka Anyasodike.

A Rivers state commissioner, notably known as one of the most accessible public servants in the state.

Dagogo Aches also noted that the photo was likely gotten from his Facebook page.

“His picture was also among the pictures discovered from the witch native doctor’s shrine in Ahoada. 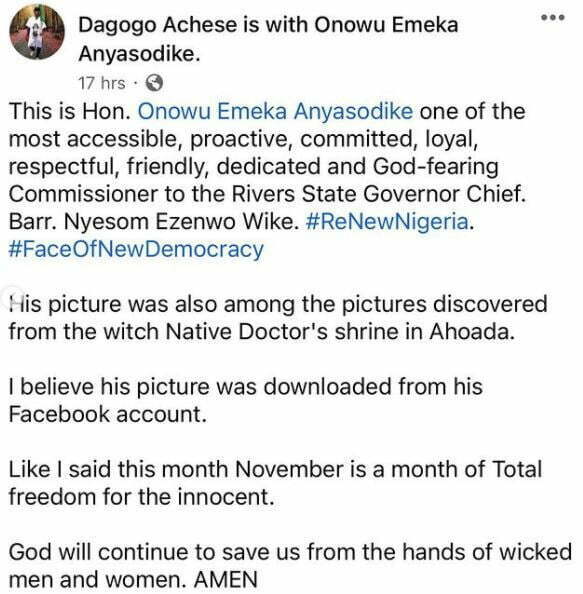 Related Topics:River State
Up Next

Obi Cubana: Why EFCC Should Go After Tinubu, Kyari – Omokri