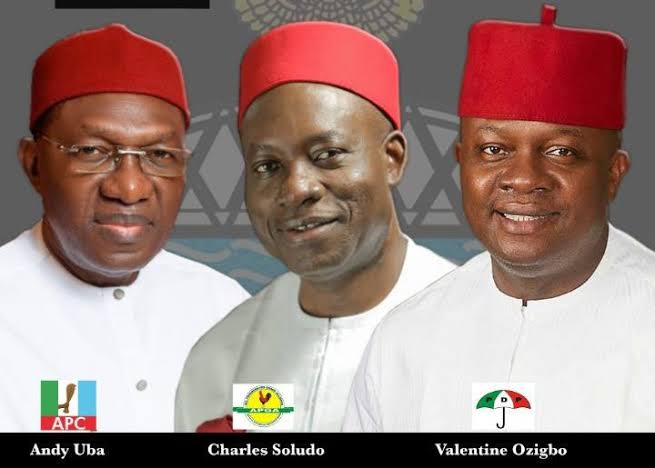 Candidates in the Anambra 2021 Governorship Elections

Candidates contesting in the November 6 governorship election in Anambra State have all agreed on the need to dialogue with the proscribed Indigenous People of Biafra, IPOB.

The governorship aspirants in their different views of the agitators believed that the Nnamdi Kanu-led movement was ‘wrongly’ constituted and that a dialogue could go a long way in dealing with issues ascribed to the group.

Naija News reports that the governorship candidates of the All Progressives Congress, Andy Uba; the All Progressives Grand Alliance, Chukwuma Soludo, and Valentine Ozigbo of the Peoples Democratic Party (PDP), all expressed their views about the secessionists and their embattled leader on Monday.

The candidates all made their stands known during an election debate held on Monday, November 1.

Speaking at the event organized by Arise Television in collaboration with non-governmental organizations, PDP candidate, Ozigbo, said the Nnamdi Kanu-led group was a product of leadership failure.

On his part, Soludo who was during former President Olusegun Obasanjo-led government the Governor of the Central Bank of Nigeria, said, ”I am on record speaking, I visited Nnamdi Kanu in 2016 in Kuje prison, with prominent people to ask for his release in line with a court order.

“Dialogue is the best solution to the IPOB issue, noting that IPOB deserves to be heard; dialogue,” he said.

However, Ozigbo called for dialogue and Kanu’s release.

He pointed out that there were certain things about IPOB that he is not in support of, such as the group’s extremism.

Andy Uba on the other hand asserted that he believed in engagement, stressing that the agitation was a result of joblessness.

The governorship candidate, however, declined to support or condemn the group.

He said engagement was the right step to take.

Naija News recalls that IPOB had declared a one-week sit-at-home protest across the South-East states starting from November 5, the eve of the  Anambra governorship election.

The group said the protest was aimed at prevailing on the Nigerian government to release their detained leader, Mazi Nnamdi Kanu.

IPOB vowed that the protest would go on as planned if Kanu was not released before November 4.

Recall that Kanu is facing trial on a seven-count amended charge bordering on treason and terrorism.