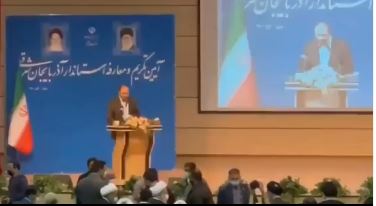 Nigerians are reacting to a video making the rounds on social media of an Iranian governor being slapped by an individual.

In the video, the governor is giving a speech when another person walks upstage and slaps him hard in the face without saying anything.

After the slap, security and others rushed upstage and took the man away.

Below are some comments culled by Naija News
1emfrigac: “‍🔥so , stunning”

100toamigo: “Na only Buhari remain wey we never slap 👋”
temmy_yrn5: “Where are the guards before ?”
allaboveclr: “The slap enter 😂😂”

queencyyy___: “Someone should recreate it in Nigeria for us 😂I want to see something 😂😂”

In other news, afrobeat singer David Adeleke better known as Davido and his former lover Chioma Avril dedicated their son, Ifeanyi in one of the branches of the Redeemed Christian Church of God (RCCG) stirring reactions on social media.

The former lovebirds who went their separate ways months back, put their differences asides to shower love and prayer on their young son, Ifeanyi after he turned two.

Sharing photos of his son on his Instagram page, the father of four prayed that his son, Ifeanyi, would grow to be greater than him and make him proud. ‏Read here.