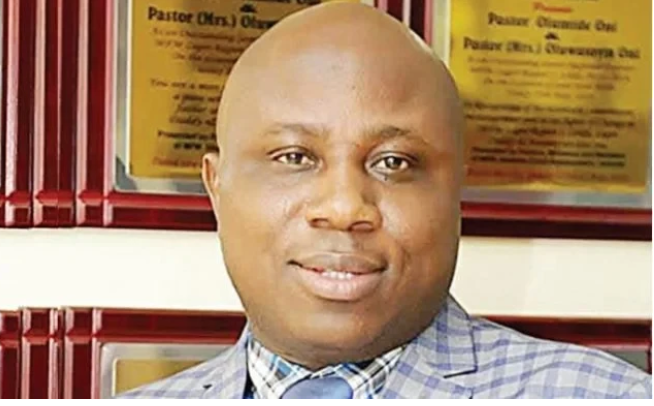 A pastor of the Mountain of Fire and Miracles Ministries, Olumide Oni has revealed how his wife agreed to marry him despite telling her that he was impotent.

The cleric with the MFM at the International Headquarters Annex, Wuye, Abuja, during an interview with Punch, revealed how he met his wife, Toyin, years ago and shared his ordeal with her.

Oni noted that his wife told him that his impotence does not matter as God had shown her he was her husband.

The cleric further stated that an end came to his impotency on their wedding day.

Oni while speaking said, “Before I married her, I told her I was impotent. But she said she had prayed and God had also confirmed that I was her husband and that there was nothing to worry about.

“I took her to Dr D. K. Olukoya, our father in the Lord, who also confirmed that to her. I told Dr Olukoya and one pastor Solomon Akinade the secret. These were the two people that we’re aware of my impotence.

“Anyway, my wife said she was going to continue with the marriage, impotence or not since God said she should marry me.

“That is why Pastor Mrs Oluwatoyin Oni is not just a wife. She is a God-given woman to my ministry and calling. So, on the day of my wedding, I told the officiating pastors, Pastor Olaoye, in particular, that I would not be able to continue with the wedding, as I was having stomach upset and feeling uncomfortable.”

“I pleaded with him to round off quickly. They quickly rounded off the wedding. We were to go to Saint Finnbas School, by Akoka College of Education. As of that time, the man in charge of that school happened to be my (house fellowship) member. Red carpet all over the place, the venue was free of charge but I could not go for the reception because of the stomach ache.

“By the time I came to my house that day, my manhood came alive for the first time in the history of my life. God restored me and today, to the glory of God, I am married to Pastor Mrs Oluwatoyin Oni and blessed with wonderful children.”