This is coming after former Governorship candidate of the Social Democratic Party in Kogi State, Natasha Akpoti, accused Omokri of asking her out despite his marital status.

An allegation that has been denied by the former presidential aide and has since been deleted from his page by Facebook after it was reported.

Omokri who noted that the post has been deleted wrote, “Dear followers, the post where I exposed the lies told against me by one Natasha Akpoti was temporarily taken down from my Facebook page by Facebook after a coordinated series of reports by a syndicate.

“I have asked Facebook for a review. Until then, you can find it on my Instagram page. If they also succeed in taking it down from my Instagram page, it will be published on my ThisDay column.

“Thank you and may God bless you all.”

Omokri while confirming that his Facebook profile has been suspended, blamed the attack on the President Muhammadu Buhari administration.

He wrote, “My Facebook profile has been suspended after a coordinated series of reporting it by a syndicate. I have appealed the decision. Now, the same thing has happened to my Instagram account (see the attached photo). I may soon be suspended here too. The same syndicate has reported my Instagram account.”

“This is an attack by the Buhari administration. This lady they are using is just a front. She is being controlled by a former PDP member who recently decamped once again to the APC and promised Buhari that he could cage me.

“All of these series of coordinated attacks on my reputation and social media profiles are not coincidental.

“They can report me to Facebook and Instagram, but I can report them to the God of heaven and Earth. It will be a battle between their god, Buhari, and my God.

“Meanwhile, I have been informed that Buhari would like to travel to London, but he is afraid of #HarassBuhariOutofLondon. Sir, do not be afraid. Come. We have a reception planned for you.” 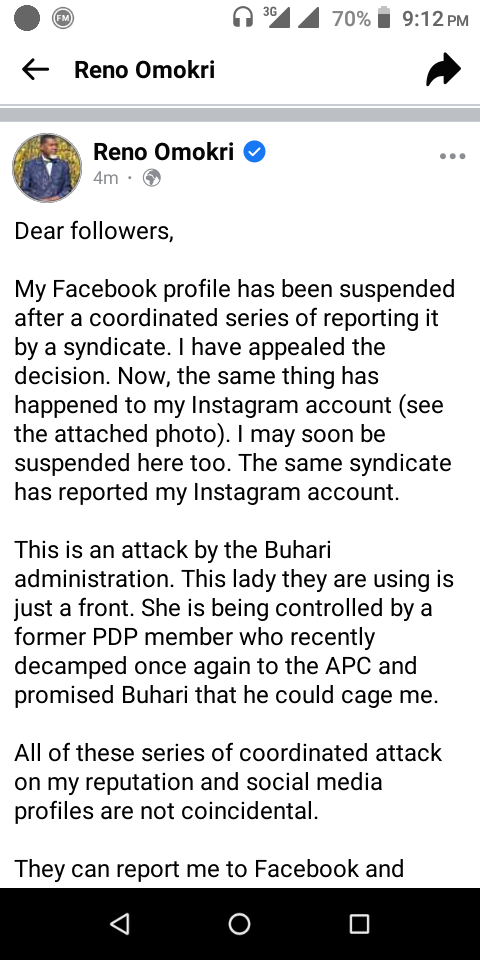