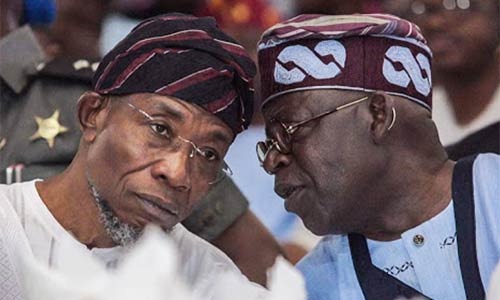 Former Osun governor now Minister of Interior, Rauf Aregbesola, has refuted speculation in some quarters that the bad blood between them prevented him from visiting All Progressives Congress national leader, Bola Tinubu while the latter received medical attention in the UK.

Naija News had reported that Tinubu returned to Nigeria Friday evening after spending almost three months in London. The former Lagos governor, in a statement issued by his media office afterwards, thanked President Muhammadu Buhari for his visit and wishes.

He also commended the Speaker of the House of Representatives, Femi Gbajabiamila, governors, APC leaders, northern Reps caucus, Lagos House of Assembly members and others for visiting him while he was in the United Kingdom.

Aregbesola has now educated those dragging him for not paying a visit to Tinubu that since his principal had visited the APC topshot in the UK, presidential protocol forbids members of Buhari’s cabinet from embarking on the same mission.

The Minister, who spoke through his Media Adviser, Mr. Sola Fasure, told Osun Defender that, “If the President has gone, no Minister, not even the Vice President (Yemi Osinbajo), can go. Aregbesola’s relationship with Tinubu is mutually beneficial and reinforcing.

“Tinubu and Aregbesola are in constant talk. The last time they talked, it lasted for more than one hour. There is no other reason for him (Aregbesola) not to visit Tinubu than just protocol.

“Anybody or group of persons who wants to make case out of the visitation issue is either ignorant or mischievous. Anyway, I can see ignorance and mischief from some of the posts I read online concerning the visitation.”

Buhari had visited Tinubu on August 12, 2021 when the President traveled for the Global Education Summit on Financing Global Partnership for Education (GPE) 2021 to 2025 hosted by the UK Prime Minister. Babatunde Fashola, a former governor of Lagos, is also serving in Buhari’s cabinet as the Minister of Works and Housing.