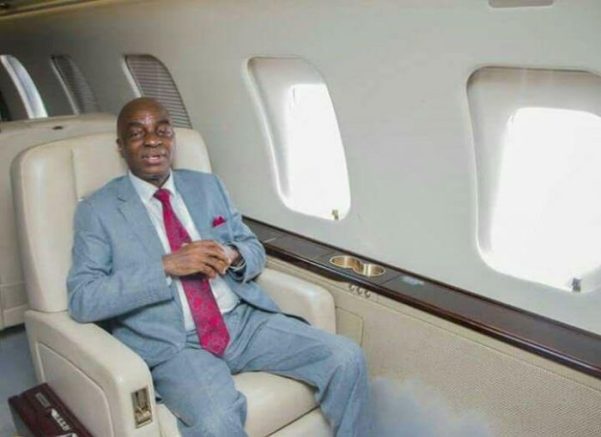 Founder of the Living Faith Church aka Winners Chapel, Bishop David Oyedepo has expressed the extent of his love for Nigeria, disclosing that he will be the last person to run from the country if there was an outbreak of war.

Naija News reports that the cleric, who spoke during Prayers for the Nation event in Canaanland, asserted that Nigeria shall not be destroyed because of the presence of believers who bear the glory of the country.

According to him, “There shall not be war in Nigeria. Those who love war God will flush them out.

“God forbid war breaks out in Nigeria, I will be the last one to leave here. I am not saying that for fun, that is where my heart is, until the last person is killed and there is no body else to help I won’t leave here”.

Oyedepo, who said his story proves that a person can only prosper in a country they love, asserted that, “if you want to prosper in this country, be a lover of this nation in truth and deed, and show it in every way you can”.

“I wasn’t a pastor, I didn’t have one parcel of land anywhere in Nigeria. I just saw a bonfire descend upon the nation and was prompted to call that fast. That was forty two years ago, you will always prosper in a nation you truly love. My story goes to validate that.

“I was 25 years old when that happened, I wasn’t called to ministry then and I had no plan for it. I just saw trouble landing on the nation in a vision and I said it’s time to pray. On the third day, God gave us this scripture: Job 34:2 – When he giveth quietness, who then can make trouble? and when he hideth his face, who then can behold him? whether it be done against a nation, or against a man only.

“Whether it be done against a nation or against a man only. I told the brethren, let’s close the siege is over. 1979, many of the people who are making noise now have not gone to school then. There are just fraudsters. When God makes you prosper, no devil can disprosper you.”