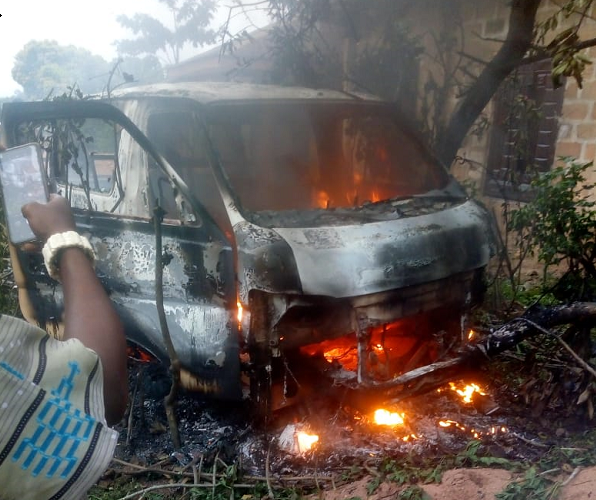 Some unknown gunmen have killed a bus driver and set the bus ablaze while enforcing the sit-at-home order of the Indigenous People of Biafra (IPOB) in Imo state.

Naija News reports that IPOB had ordered a sit-at-home across the South East on October 1 and directed that all Nigerian flags in the region be brought down.

The outlawed group had said the order is in solidarity with a secessionist group in Cameroon, Ambazonia, whose purported independence anniversary coincides with Nigeria.

According to a resident in the area, the gunmen intercepted the bus along the Owerri-Umuahia expressway on Friday morning and set it on fire.

He disclosed that the five occupants of the vehicle successfully escaped while appealing to the government to urgently end the killings in the state.

“This insecurity is getting out of hand and if urgent steps are not taken by the government things may get worse.

“These senseless killings and attacks in the entire south-east should be curtailed now before it degenerates into total anarchy,” he said.

Advertisement
In a post on his Facebook page, Igbokwe, a chieftain of the All Progressives Congress (APC), claimed it has been confirmed that IPOB killed Akunyili in Anambra State.

“It is now confirmed that IPOB bandits have killed Dr Chike Akunyili; the husband of late Prof. Dora Akunyili in Anambra State,” he said.

Recall that the Indigenous People of Biafra (IPOB) had denied any kind of responsibility or involvement in the murder of Dr. Akunyili.

The group last Wednesday through its spokesperson, Emma Powerful, submitted that it doesn’t kill people and specifically, it has nothing against the murdered Akunyili.