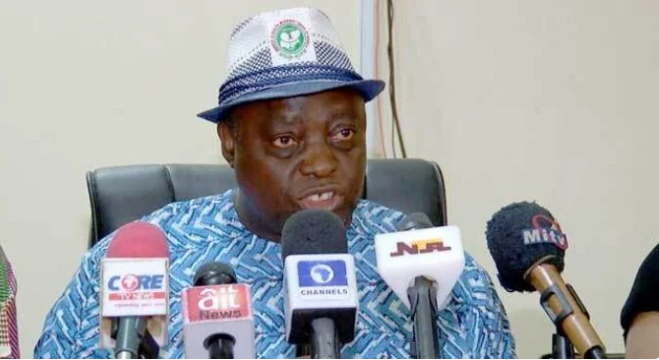 In order to stop the imminent total shutdown of the health sector, the Joint Health Sector Unions (JOHESU) and Assembly of Healthcare Professional Associations (AHPA) have issued a fresh directive to the Federal Government.

In a statement issued on Tuesday by its National Chairman, Biobelemoye Josiah, JOHESU asked the government to quickly address the demands of health workers in the country.

Naija News reports that JOHESU had on two occasions given the federal government a 15-day ultimatum to address its demands.

On September 2, the unions first gave the government an ultimatum, and following the expiration of the deadline on September 17, JOHESU issued another 15-day ultimatum.

According to Josiah, JOHESU asked the government to speed up its efforts on the issues raised in order to avoid the closure of health facilities across the country.

He added that the unions noted the appeal from President Muhammadu Buhari on the need to show understanding with his administration and his pledge to pay any debt owed to health workers.

Josiah appealed to the federal government to act according to agreements reached, adding that JOHESU is not a “strike monger”.

“It is pertinent to draw the attention of the federal government to our fresh 15 days strike notice, which is billed to expire in the next few days, and for it to act to avoid a shutdown of hospitals and other healthcare facilities.

”We wish also to inform the general public that our NEC noted the appeal from President Muhammadu Buhari on the need to show understanding with his administration and the President’s pledge to pay any debt owed health workers.

”We would also wish to note some of the resolutions reached at the end of our meeting, to show that we are not strike mongers, but just for the federal government to act according to agreements reached.”

Josiah asked the government to provide new data for the computation of the adjusted Consolidated Health Salary Structure (CONHESS) for JOHESU members.

He said: “This should be completed and submitted to the ‘High-Level Body (HLB)’ of the federal government not later than Sept. 22, as agreed.

“We also urge the Federal Government to ensure that the HLB complete and submit the computation of the adjusted CONHESS for inclusion in the 2022 budget on or before the Sept. 30 submission window.

“We charged the federal government to reciprocate the patriotic humanitarian gesture of JOHESU in the interest of the larger Nigerian masses to expeditiously resolve all the demands within the 15 days window.

“While we push for better welfare and conditions of service for our members, we urge the federal government to reflect the promises of Mr President in the activities relating to our demands to ensure continuous industrial harmony in the health sector.”

The welfare issues raised by JOHESU are the adjustment of Consolidated Health Salary Structure as was done with Consolidated Medical Salary Structure since 2014, payment of all withheld April and May 2018 Salaries of our members and withheld Salaries in Federal Medical Center, Owerri, JUTH and LUTH, review of the defective implementation of COVID-19 Special Inducement and Hazard Allowance, implementation of National Industrial Court of Nigeria Alternative Dispute Resolution, Consent judgment and other court judgments, increase in the retirement age from 60 to 65 years for health workers and 70 years for Consultant Health Professionals.

Others are; payment of reviewed hazard allowance in terms of payment that guarantee fairness and justice to all concerned, payment of actual 30 percent consolidated basic shift duty allowance to Nurses/Midwives and others.

Payment of teaching allowance to members on CONHESS 7 and 8 (Nurses, Midwives and others) and proper placement of Nurse Graduates and Interns, payment of outstanding salaries of intern health professionals and all the Tertiary Health Institutions, proper implementation of the consultant pharmacist cadre for pharmacists in the public sector, among others.