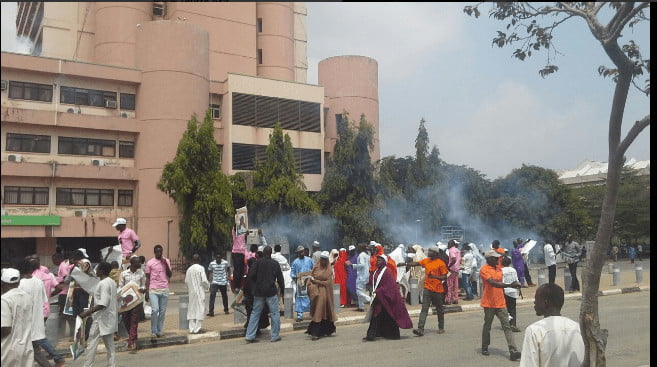 Men of the Nigeria Police Force has in a joint security operation recover bombs, charms and other fighting materials from Shi’ites members arrested on Tuesday.

Naija News had reported earlier that members of the Islamic Movement in Nigeria (IMN) popularly known as Shiites were arrested by the Nigerian Police Force in Abuja on Tuesday.

The spokesperson for the FCT Police Command, Josephine Adeh, who spoke with journalists on the development, said the suspects were apprehended for being involved in violent protests at the Kubwa-Gwarimpa axis of Abuja.

An update from the FCT Police Command has confirmed that 57 suspected Shi’ites members were arrested this morning, contrary to the earlier reported numbers.

The Islamic group are said to have staged the Arbaeen trek on 3rd Avenue, Gwarinpa district of Abuja, keeping commuters stranded by blocking roads and triggering panic and tension in the area. Armed security men who responded to the protest reportedly shot sporadically to disperse the protesters causing residents to scamper for safety.

Giving an in-depth update on the Tuesday morning chaos, DSP Adeh revealed that calmness has been restored to the area.

The Police PRO, however, faulted the report that casualties were recorded during the incident.

She said items recovered from the suspects include, a vehicle, flags, petrol bombs, weapons, mobile phones, charms and other exhibits.

She said: “The FCT Police Command in a joint intervention with the Nigerian Army and other security agencies have restored normalcy to the Gwarinpa area of the FCT and other parts of the Capital where miscreants identified to be members of the Islamic Movement of Nigeria (IMN) also known as Shiites, caused unnecessary hardship to motorists and other road users as well as individuals going about their businesses.

“The miscreants who were found in their numbers were promptly intercepted by the security operatives and dispersed to prevent them from causing further disruption of public order and peace and damage to public and private assets.

“The miscreants attacked the security forces with petrol bombs, weapons including stones but were adequately rounded up by the security teams without any casualty.

“A total of fifty-seven (57) suspects including thirty-nine (39) and eighteen female (18) were arrested and currently being profiled at the State Criminal Investigations Department of the FCT Police Command.

“A vehicle, flags, petrol bombs, weapons, mobile phones, charms etc are some of the exhibits recovered from the miscreants.

“The Command, while calling on residents to be calm, warns any individual or group who may want to disrupt the peace being enjoyed in the Capital to desist or be ready to face the consequences of their actions. Residents and commuters are also advised to go about their lawful endeavours without any fear or apprehension”.