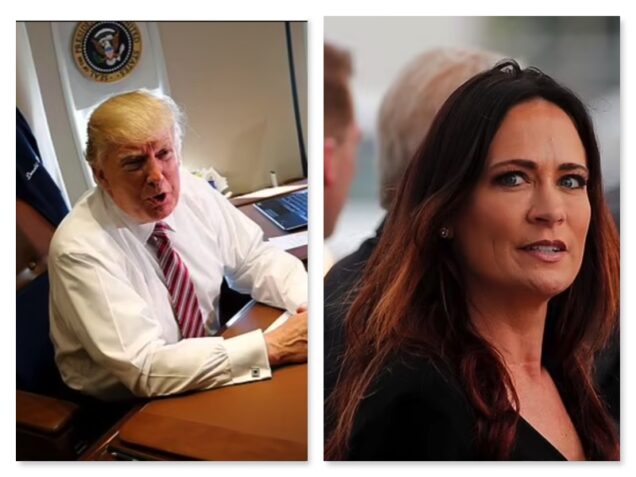 Grisham, 45, made this revelation in her new salacious tell-all ‘I’ll Take Your Questions Now’ which will be released publicly on October 5.

She also wrote that the former president once asked her former boyfriend, also a Trump aide, if she was good in bed.

Trump even once called Grisham to demand the presence of an unnamed press aide on Air Force One so that he could “look at her [behind]”.

According to the book, the Stormy Daniels affair ‘unleashed’ Melania’s vengeance as she began trying to contradict her husband in public.

When Grisham drafted a tweet requesting privacy at the time of the affair, saying that Melania would focus on being on her roles as first lady, wife, and mother, Melania had her scrub the tweet of the word “wife”.

Grisham served as press secretary to Trump from July 2019 to April 2020, she never once addressed a press conference within those 12 months.

She then returned to her previous role as press secretary to First Lady Melania from April 2020 until January 2021. She resigned from the position on Jan. 6 following the Capitol riot.

Grisham alleged that the administration was shrouded in a culture of lies, “casual dishonesty filtered through the White House as if it were in the air conditioning system”.

Grisham also recounts a meeting between Trump and Vladimir Putin in Japan in 2019 where Trump smooth-talked the Russian president and told him he was only talking tough in front of the cameras.

“I’m going to act a little tougher with you for a few minutes. But it’s for the cameras, and after they leave, we’ll talk. You understand.”

The rest of the 90-minute conversation is shrouded in secrecy as journalists were ushered out of the room.