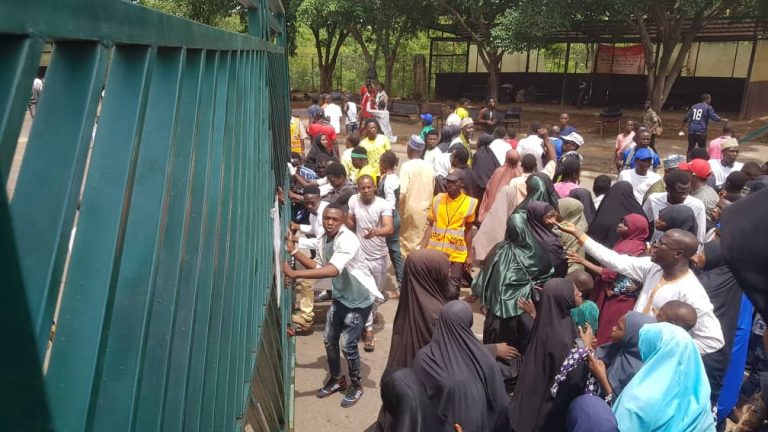 A video currently trending online has shown how some security officers attacked members of the Islamic Movement of Nigeria (IMN) also known as Shiites.

This follows the clash between the Shiites and security operatives in Abuja on Tuesday.

As seen in the trending video, the joint security team made up of soldiers and police mercilessly beat up many of the Shiite members.

Particularly, one of the Shiite members was stabbed multiple times and left to die in a pool of his own blood by a soldier whose face could not be clearly seen in the video.

Watch the emotional video below.

Naija News also observed that earlier the members of the Islamic Movement in Nigeria (IMN) popularly known as Shiites were arrested by the Nigerian Police Force in Abuja on Tuesday.

The Shiites were observing the Arbaeen trek before the situation degenerated.

The spokesperson for the FCT Police Command, Josephine Adeh, who spoke with journalists on the development, said the suspects were apprehended for being involved in violent protests at the Kubwa-Gwarimpa axis of Abuja.

An update from the FCT Police Command has confirmed that 57 suspected Shi’ites members were arrested this morning, contrary to the earlier reported numbers.

The Islamic group are said to have staged the Arbaeen trek on 3rd Avenue, Gwarinpa district of Abuja, keeping commuters stranded by blocking roads and triggering panic and tension in the area.

Armed security men who responded to the protest reportedly shot sporadically to disperse the protesters causing residents to scamper for safety.

Giving an in-depth update on the Tuesday morning chaos, DSP Adeh revealed that calmness has been restored to the area.

The Police PRO, however, faulted the report that casualties were recorded during the incident.

In a closely related development, men of the Nigeria Police Force have in a joint security operation recovered bombs, charms, and other fighting materials from Shi’ites members arrested on Tuesday.