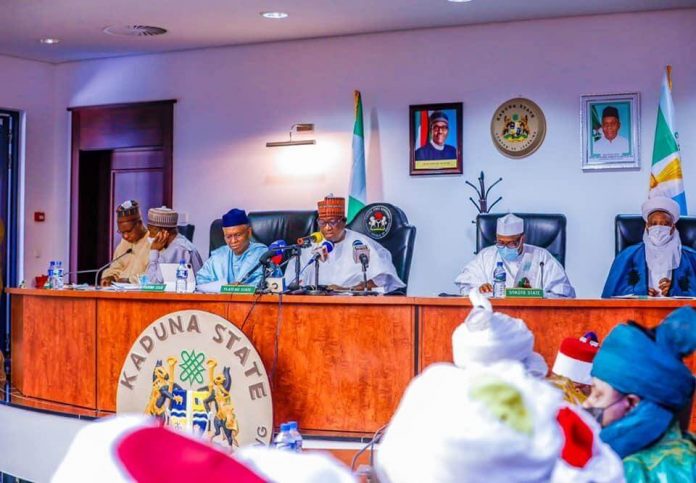 Governors from the Northern region of the country met on Monday, 27th September 2021 to discuss and take a stand on certain national issues as it concerns the region and its people.

The Governors, under the auspices of the Northern States Governors’ Forum, held the meeting jointly with some traditional rulers and Emirs from the region led by the Sultan of Sokoto.

Part of the issues discussed and resolved as earlier reported by this online news platform include that the Governors rejected the idea of zoning the 2023 presidency to the southern part of the country.

They condemned the position earlier adopted by their southern counterparts, arguing that zoning is not a constitutional issue.

The meeting also discussed the issue of Value Added Tax (VAT) collection and the current controversy it is generating between the federal and state governments.

In their position made known in the communique after their meeting, the Northern Governors also rejected the stand of their Southern counterparts on the issue.

They said in order not to cause economic hardship and multiple taxation, the Federal Inland Revenue Service (FIRS) should continue collecting VAT in the country.

Naija News has now obtained the full text of the communique signed by Simon Lalong, the governor of Plateau State and chairman of the Northern Governors’ Forum, issued at the end of the meeting which conveys the position of the Governors on issues discussed.

Below is the full text.

The Northern States Governors’ Forum, in its continuous efforts to address the challenges bedeviling the Northern States convened an Emergency Meeting today Monday 27th September, 2021 at the Council Chamber Sir, Kashim Ibrahim House, Kaduna. The meeting was also attended by Chairmen of Northern States Traditional Council led by His Eminence the Sultan of Sokoto.

The Forum discussed issues of Peace, Progress, Development and well-being of the Northern States. The Forum took stock of progress made in handling challenges of Banditry, kidnapping, armed robbery and insurgency.

After extensive deliberations, the following resolutions were arrived at:-

1. The Forum reviewed security updates from the Region and observed the need for a sustained synergy and coordinated efforts between the Federal and Northern States Governments while noting success of recent measures. The meeting also noted with concern the constraint of the security services and urged the Armed Forces to embark on simultaneous operations and resolved to share the plans of the Frontline States come up with common with other Region; and assured of its readiness to work in synergy with the Federal Government of Nigeria in finding lasting solution to the current security challenges.

2. The Forum appreciated the ongoing onslaught against banditry, kidnapping and Boko Haram especially in the North East and parts of North West and North Central States and encouraged the Armed forces and other security agencies to sustain the tempo to enable the security challenges be permanently addressed in the shortest time.

3. The Forum received updates on the Renewable / Solar Energy Project and NOTED that request for land for the project had been submitted and are being processed by the Northern States. The Committee had commenced negotiations in a public private arrangement and sovereign guarantees to ensure bankability of the project by multilateral financial organizations. The Forum called on States yet to process the request for allocation of land for the project to expedite action.

4. The meeting received updates on activities of some Committees constituted by the Northern States Governors’ Forum and NOTED that recommendations contained therein are being considered with a view to coming up with implementation strategies.

5. The Forum observed that some Northern States Governors had earlier expressed views for a power-shift to three Geo-Political Zone in the South with a view to promoting unity and peace in the Nation. Notwithstanding their comments, the Forum unanimously condemn the statement by the Southern Governors Forum that the Presidency must go to the South. The statement is quite contradictory with the provision of the Constitution of the Federal Republic of Nigeria (1999) as amended that the elected President shall:-

score at least 25% of the votes cast in 2/3 States of the Federation.

In the case of run-up simple majority win the election.

6. The Northern State Governors Forum considered the on-going National debate on the collection of Value Added Tax (VAT). As responsible leaders, while we are constraint by the fact that the matter is sub judice we however for the purposes of educating the public make the following observations:
(a) the judgement of the Federal high Court calls to question the constitutionality of VAT, withholding tax, education tax, Niger Delta Development Commission, National Information Technology Development Agency, 13% derivation, National Economic Development Council, and many others currently levied and collected by the Federal Government of Nigeria, Federal Inland Revenue Service.

(b) Rivers and Lagos State Government had enacted their own VAT laws and the Southern Governors Forum have expressed support for this course of action;

(c) VAT is being confused by these State governments as a sales tax. If every state enacted its own VAT Law, multiple taxation will result in increases of prices of goods and services and collapse in interstate trade. VAT is not a production tax like excise, but terminal tax which is paid by the ultimate consumer;

(d) Another confusion is ignoring observation above and its “overall effect”. The reason Lagos account for our 50% Vat collection is because most of the telecommunication companies, Banks, manufacturing, and other trading activities have their headquarters in Lagos with the resultant and wrongful attribution of VAT

(e) Until and unless the Supreme Court pronounces judgement on the substantive matter between Rivers State and Federal Government, the matter is sub judice and Northern States Governors Forum would respect this.

7. The Traditional Rulers Councils appreciated the efforts made so far by the NSGF in addressing the key areas of challenges facing the Northern States, they expressed their willingness, solidarity and collaboration with the Governors’ in addressing these challenges particularly the issue of security. It was equally resolved that perpetrators of crimes should be dealt with irrespective of their status in the society.

8. The Forum decried the high level of conspiracies being perpetrated by some Judicial Officers in releasing/granting bail to arrested criminals. This attitude sabotages the fight against criminality, therefore, there the need to develop good and robust intelligence mechanism amongst States was identified as a panacea.

9. The Forum calls on Agencies to leave up to their responsibility, Traditional rulers are to equally mobilize their various communities in checkmating the ugly trend of criminality in their domains.

10. The Forum NOTED the ugly trend in the spread of drugs and consumption amongst the teeming youth and therefore, calls on all levels of Governments and communities to rise to the occasion by stemming the tide.

11. The Forum also call the Federal Government to expedite action on the well establish National Livestock Transformation Programme as a spring board in transiting from the open grazing system as widely practice in the North