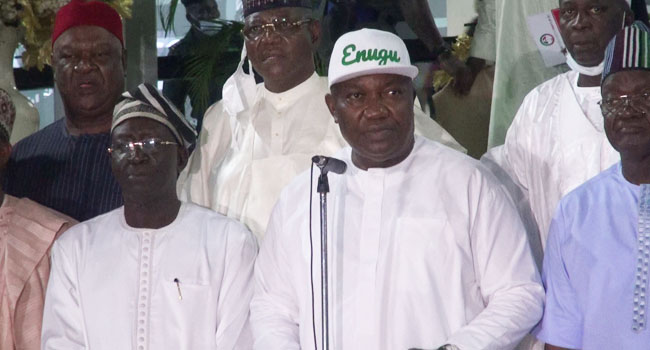 Governor of Enugu State, Ifeanyi Ugwuanyi, has said the Peoples Democratic Party (PDP) has not decided where to zone the Presidency and other political offices.

Ugwuanyi made this known while addressing newsmen after the maiden edition of the PDP Zoning Committee meeting at the Government House, Enugu on Thursday.

The governor, who is the Chairman of the committee, explained that the committee has no mandate to zone any political office ahead of the 203 elections.

He stated that the committee is strictly limited to the National Executive Offices to be contested at the PDP National Convention scheduled for October 20 & 21, 2021.

“We have no mandate to zone political offices such as President or Vice President of the Federal Republic of Nigeria.

“Our committee is strictly limited to the PDP National Executive Offices to be contested at the 2021 PDP National Convention scheduled for the end of October 2021,” he said.

According to the governor, the committee will help in finding National Officers that will help the PDP achieve the lofty ideals and goals of the party’s founding fathers.

He maintained that the PDP remains the most credible platform to deliver good and accountable governance to Nigeria.

Ugwuanyi, however, encouraged members of the committee to be sincere and constructive in their proposals and debates, and exhibit consistency with the enormity of their mandate.

Members of the committee present at the meeting include the Governor of Benue State, Samuel Ortom who is the Deputy Chairman, the Deputy Governor of Zamfara State, Barr. Mahdi Aliyu Mohammed, who serves as Secretary, former Presidents of the Senate, Senator Iyorchia Ayu and Senator Anyim Pius Anyim.