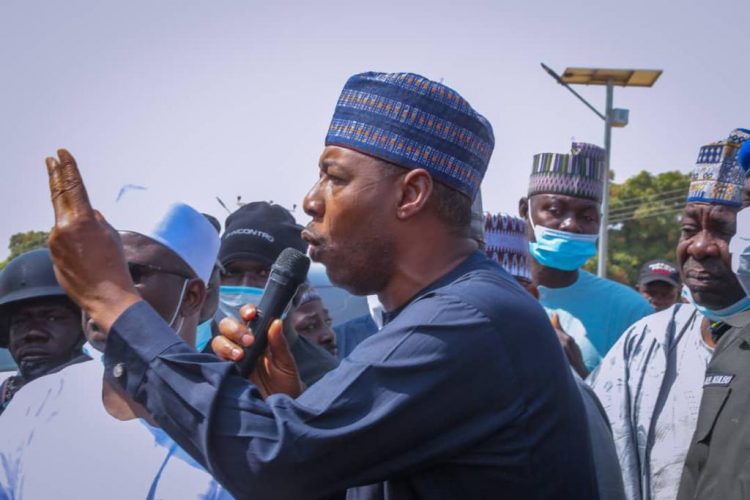 The governor of Borno state, Babagana Zulum has said that he will be working in full cooperation with the federal government to ensure that Boko haram surrenders so peace can be restored to the North East region.

The governor made the announcement in a town hall meeting organized by the Ministry of Information and Culture on the destruction of telecommunications and power infrastructure in Borno state on Thursday, September 23rd.

He applauded the decision of the insurgents to law down their arms, adding that measures have been put in place two months ago to fast-track the process of surrendering.

Zulum said: “The ongoing surrender of Boko Haram is a welcome development. Two months ago, we took a decision that will ensure that we leverage on the process.

“So far, thousands of them have surrendered. We have been receiving tremendous support from Nigerian Army, Nigerian Police and DSS, and others at ensuring the success of this  very process.

“Governments at state and federal level are working to establishing a sustainable framework that will ensure proper handling of this process and Mr. President has promised to support this initiative.

“They are bridge between the government and the governed in line with the principles of participatory democracy. Insurgents sometimes in January this year planted explosives devices and detonated them on some of the high tension wires supplying electricity to the state, leading to the power lines. This culminated to the darkness being experienced in the past months. This has been a harrowing situation, especially for those who depend on constant electricity  for their livelihoods.

“After the first destruction of the power lines, we mobilized resources to effect necessary repairs both at the Federal and state level. After spending millions of Naira, the excitement was short lived as the insurgents, 24 hours later destroyed the repaired lines along with other facilities which subjected the people to despair and hopelessness.

“At the initial stage, the state government alerted the federal authorities of the destruction of the power lines with the imperative of effecting immediate repairs in order to restore regular power supply to the state.

“Since it is virtually impossible to provide 2 protection to power lines in the state or any other part of the country, it has become a matter of technological imperative for the Federal government to look into the possibility of deploying technology to protect physical infrastructure.