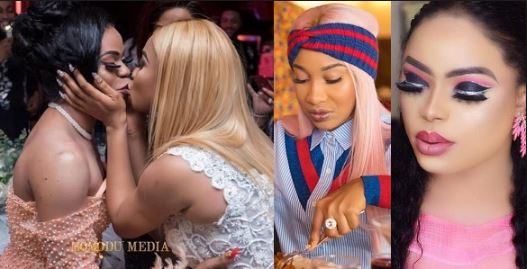 This is coming after fans tongue-lashed the male barbie for throwing a heavy shade at the mother of one on social media following her recent crossfire, with her ex-lover, Prince Kpokpogri.

In defence, Bobrisky in a new post disclosed how he was told to insult Rose Churchill, wife to Tonto Dikeh’s ex-husband Olakunle Churchill for loyalty. He also added how he was there for her when everyone left when she had issues in Dubai.

The post reads: “I did nobody no wrong, I was loyal for 4years of friendship, even when I was told to insult rose (Churchill) wife I dragged that lady without doing anything to me just because I wanted to be loyal.

“Only a heartless person will hold your money (millions of naira) and still fight you without any reason, I wasn’t begging for the relationship.. you were the one that came to me first so don’t make it look like I came to you. 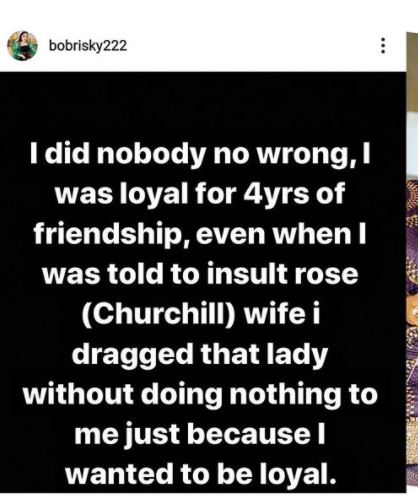 “All your friends left you in Dubai when you had an issue i was the only soul who stood by you for 3 months, I remember it was that year bloggers were laughing at her and calling her names, I signed out of my Instagram page for her to log in so people could believe she wasn’t arrested and all I get is I’m a wicked friend.. Fools” 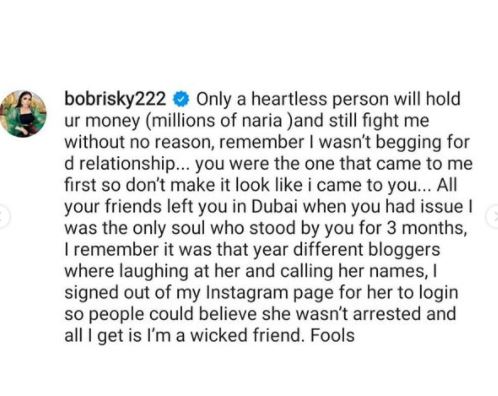 Despite airing his grievances on why he has continued to nurse a grudge towards the actress, fans have attacked the cross dresser asking him to let go  move on with his life without throwing shades at her unprovoked.

miz_mimiii wrote; “Lmao may we not dine with our enemies who camouflage as friends”

awake9jahookups wrote; “WEN BOBRISKYY AND TONTO WERE BESTIES! IDRIS WAS THE FIRST TO BEG TONTO OPENLY THAT WHATEVER ARGUMENT THEY HAVE, THEY SHOULD NVR SPILL EACH OTHER’S SECRET! NOW SEE HIM!!! HE HAS BIN LOOKING FOR THIS OPPORTUNITY FOR A LONG TIME! FEAR HUMAN BEINGS”

cici_cimbie wrote; “He talks too much abeg”

daliducutty wrote; “Bob rest. No body call you for this matter. U just wan enter matter way get nothing to do with you. Did someone hold a Gun on ur head to drag Churchill’s wife? Bruh geratttttttttt go and be doing your giveaway. Tonto is your KING
ladyque_1 wrote; You’re not a good friend.”