Commercial banks in the Ijebu-Ode area of Ogun State have suspended their services over a notice of attack reportedly sent by daring armed robbers.

About two weeks ago, some unknown armed robbers reportedly wrote a letter to residents of the Olosan community in Ogun state, informing them of their impending attack.

Naija News understands that the robbers in the open letter to the Ogun community, revealed that they would be visiting soon, warning that people who can not provide a substantial amount will be paying with their lives.

They also urged the occupants to prepare very well for their coming.

The letter reads; ”Announcement to all occupants in loan community. We armed robbers will come visiting very soon. You can inform d police, it’s none of our business, anyone we get to his/her place that can’t provide a substantial amount will pay with their lives..prepare for us as we r coming.”

See a copy of the said letter below; 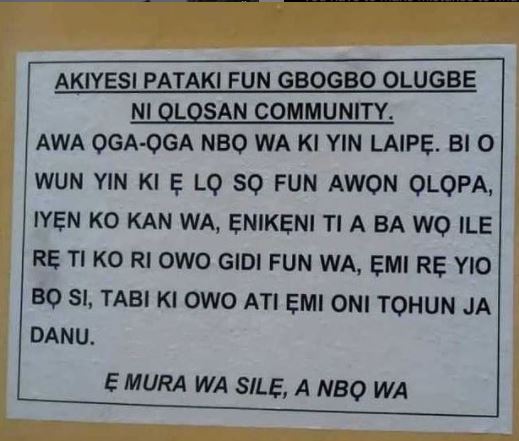 Reports, however, reaching Naija News on Thursday according to some sources said the banks have since Monday down tools following letters allegedly sent to some of them by the suspected robbers.

The fear of getting killed and as well loss of assets to the daring robbers, has forced all banks within the axis to declare they will not operate until the Ogun State Government assist the police with armoured personnel carriers to be mounted close to their branches.

Some residents of the community who spoke anonymously with newsmen revealed they had been travelling to places like Sagamu, Abeokuta and others to deposit or withdraw money.

A Point-of-Sale (POS) operator, who identified himself as-Salam, lamented that the development portends “great danger” for him and others in the business in Ijebu-Ode.

“We withdraw money from banks to pay our customers and we also deposit in the bank when we have large sums of money in our kitty. If the banks are not opening, it will negatively affect us. In fact, it is affecting me already. I’ve been going to Sagamu to make withdrawals. It is bad,” Salam lamented.

The DPO of Igbeba, Ijebu-Ode, CSP Musiliu Ishola Doga, confirmed that the banks do not open.

Doga, however, said the letter reportedly sent by armed robbers to the banks is not true.

According to him, the police were on a 24-hour patrol of all Ijebu-Ode metropolis, wondering why the bankers would refuse to open for business because there are no armoured personnel carriers stationed around them.

He said: “It was a rumour that a letter or message was sent to the banks. None of them can confirm that message. It was just a rumour as far as I am concerned. But we are doing our job. We are doing our patrol and we shall continue to engage the bankers in meetings, to ensure them that we are up to the task. But I think they willingly don’t want to open the banks.

The DPO, however, appealed to the bankers and members of the public not to nurse any fear over the matter. He assured them that the police is ready to protect lives are capable of handling the situation.

“The bankers and the people should not panic. We, the police, are ready to protect lives and properties. We are on 24 hours duty. There is no problem. We are capable of handling the whole situation,” he assured.

Also, the Ogun State Public Relations Officer, Abimbola Oyeyemi, corroborated Doga’s submission, saying: “They are just entertaining fear where there is none; even the Area Commander and the DPOs have told them that there is no need to fear. Why should they be afraid because there are no Armoured Personnel Carriers (APC)? Even if the APCs are working, is it not the police that will operate them?

“The police are on the ground to provide adequate security for lives and property. They are the ones that know why they are entertaining fear. We have assured them of their protection and our presence everywhere in Ijebu-Ode and everywhere in Ogun state. There is no reason to be panicking,” Oyeyemi stated.