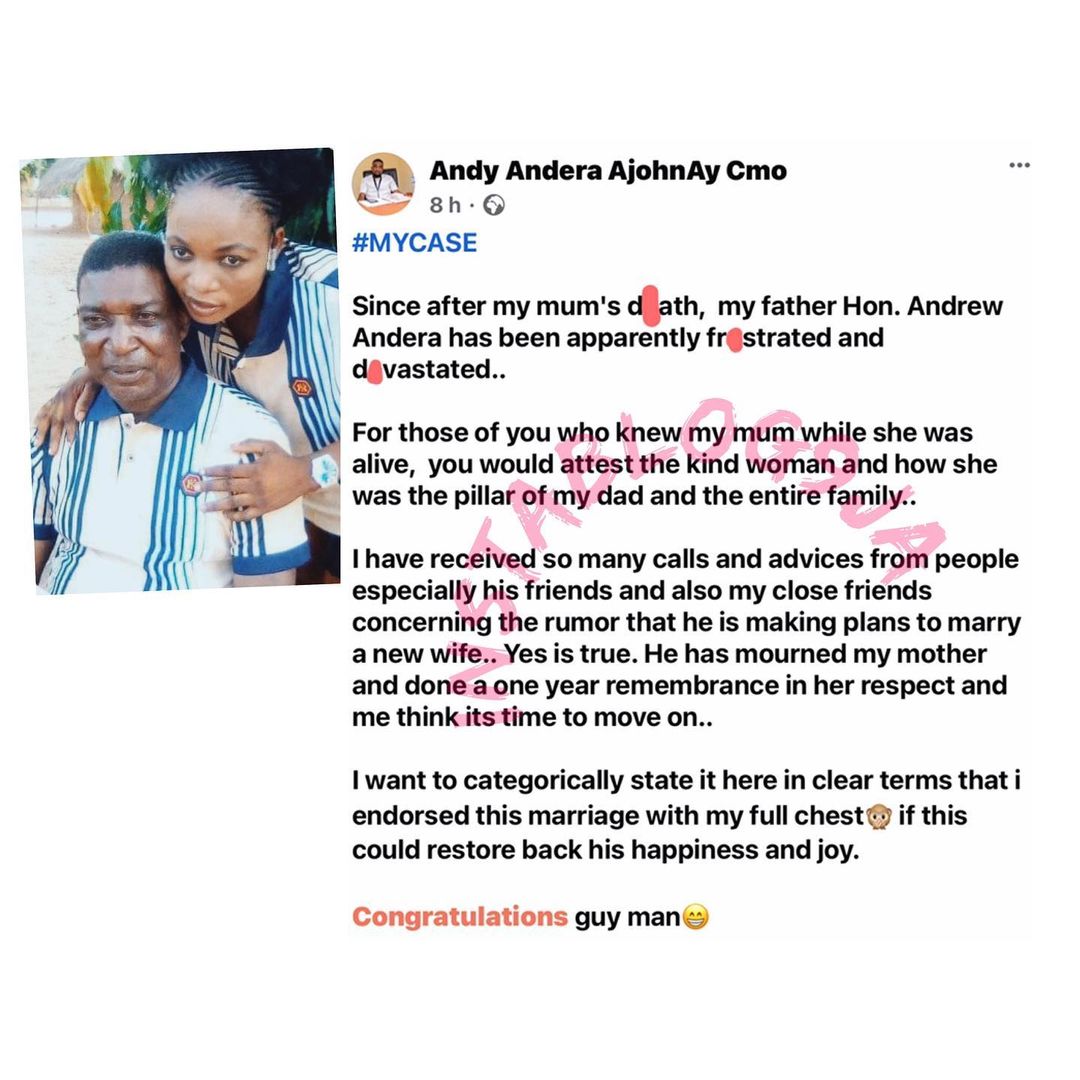 A man has endorsed the marriage of his father to another lady one year after his mother’s death.

The man, going by the name Andy Andera AjohnAy CMO on Instagram stated that since the passing of his mother, his father has been devastated.
He said those who knew his mom were aware that she was the pillar that held their family together.
Andy went ahead to say that he had been receiving calls from friends asking if the rumor of his father getting married again was true.
He stated that he would like to clear the air and let everyone know that he has given his father his endorsement for the new marriage since he has mourned his mother and also done a one year remembrance for her .
However, this did not go down well with some people, as they feel a woman would have come under fire if the case was reversed.
Below are some reactions from readers:
nenejones_esq Let him marry now? My issue is when anyone would discriminate against anyone who mourns her husband for just one year and goes ahead to remarry. Women are affected like that too. Congratulations to them.
kokoyate If na woman now, una go say e too quick.
lagos.vendorshub This your full chest endorsement 🙄 Hope the lady is coming for papa alone ooo…🚶‍♀️🚶‍♀️🚶‍♀️
favourmarisadim Would you endorse if it’s your mother wanting to remarry?
bshizzle70a It is sel fish and wic ked to expect someone’s life to literally stop after losing their loved one . THEY HAVE TO MOVE ON . That is life .This is why , no matter how sad one is , no loved one ever gets buried with the dead at the burial cere
iamrealebere When the Bible made it clear that only death will do couples part, his free to marry abeg as long as he Carter for his problems.
sophiaposh “One year after his mom’s death” omo that’s too fast nah
whizbee_official Correct pikin! Although, I’m unsure how this concern the online in-laws, this endorsement be like press release
bold_blacksheep Okay what should we do ?😒🙄
adebukola.x.x E no concern us
mizkimoraprecious Congratulations guy man🤣🤣🤣Everyone deserves to be happy