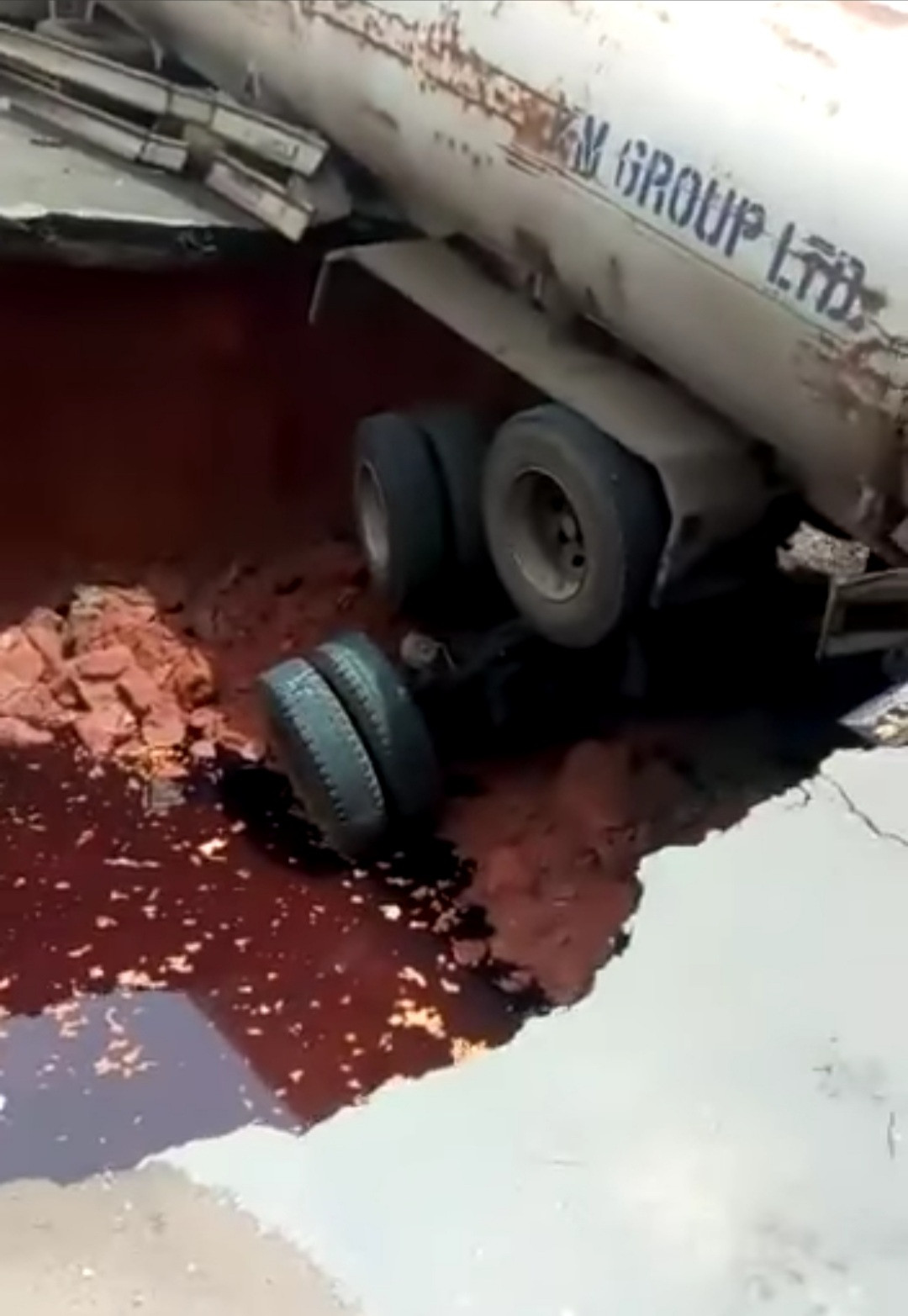 A trailer carrying diesel has sunk on a newly constructed road on Onitsha-Owerri federal highway.

The collapse led to serious gridlock, forcing commuters to get down from their vehicles and begin trekking to their destination.

Some of the witnesses say that the sinkhole seemed to appear from nowhere when the trailer was passing.

After the trailer sank the contents spilled onto the highway.

Anonymous: Everything about Igbo people is fake. Hahahaha! A dual carriage road with any form of piling and serious filling. Imagine! The contractor should be arrested with immediate effect.

Hjay: We shall keep praying for the good of Nigeria…cos no be small Naira you go gather to get

Visaonyekachi augustine: Very close to my office. Its been a nightmare since Monday. The gridlock is second to none

Boss Murphy: This is not a new road pls. This road was done between 2001-2003 by the Obasanjo administration. I guess there was a wash out which wasn’t attended to. FGN should hurry up n fix this road. It’s a federal Government project

In other news, the General Superintendent of Deeper Christian Life Ministry, Pastor William Kumuyi, Wednesday, urged the Federal Government to use the stick-and-carrot formula for Boko Haram members that surrender.

Naija News reports that he stated that having the reign of peace in Nigeria is more important than punishing repentant terrorists hence the government should use more of the carrot approach in dealing with terrorists.

Speaking at the Nnamdi Azikiwe International Airport upon arrival for a five-day crusade in Abuja, Kumuyi said Nigeria will experience real independence from attacks, oppression and torture as she celebrates Independence Day on October 1.

According to him, “I believe that as we follow the issues, they are trying to resolve everything.

“I think as we have conflict, the solution is not attacking each other and finding fault, but finding a middle ground; whether we dialogue or negotiate. And I believe that we are about seeing the end of the tunnel.”

On pardoning Boko Haram commanders and members, who claimed to have surrendered to the Nigerian military, the preacher advised government to approach the issue holistically for lasting peace in the country.

He said: “Because of the past experiences, the government will have to look at the situation, look at real surrender and sincerity, and as we think about that together, it is a two-way programme.

“It is like having the carrot and the stick, but sometimes we have to approach the carrot method so that there can be peace.”